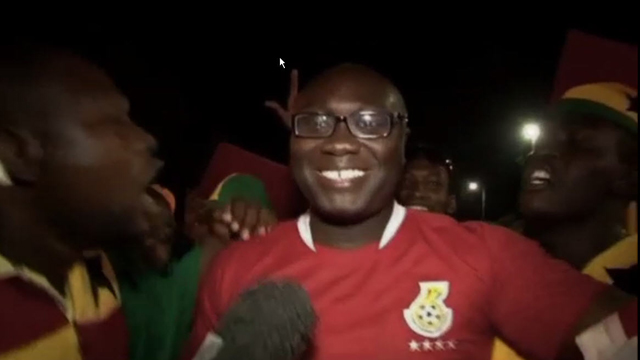 I went to bed last night hoping that I'd wake up this morning and all that happened yesterday would just be an unexplainable blip in the order of the world. But that voice, that face, that handshake, that viral smile stayed me through the night. And this morning everything is still the same.

As a professional, it's easy to understate Komla Dumor's achievements. He went from plucky radio station in Ghana, to Network Africa, to World Today on the World Service, to BBC World and Focus on Africa TV. The journey from Africa to a global broadcaster of such renown is not so common. He singlehandedly changed the sound, and look of the BBC's global broadcasts - no mean feat for an individual. The rest of us black Africans who're in the global news business walk the path Komla cleared for us.

The reason he rose was two things, editors saw/heard him and thought, "bloody hell, this guy is talented". And, he put in work, as they say, Looking at his boundless energy on screen or his permanent enthusiasm on the radio, you wouldn't know how hard Komla worked. So many times I remember waking up to him doing some live broadcast, going asleep to him, and waking up to him again on the same story. The number of cover shifts he did before moving permanently to BBC World. In 2012, I saw him taking some language classes, Portuguese he told me. He wanted to go to the World Cup in Brazil. If I wanted to stand a good chance of going, I'd better get learning. He didn't rest on his laurels.

I won't even talk about talent, it was there for all to see. There are very few people who have memorable screen moments, but even in his relatively short time, there are so many. His bright orange tie during the Dutch Royal Wedding last year (a testament to the sharpest dresser in news), spinning the basketball on his finger at the end of one edition of Focus with Peter Okwoche, and of course the great unveiling of that Black Star football shirt at the World Cup in South Africa.

He was an Afrorealist. He acknowledged Africa's faults, but also celebrated its triumphs. That's why his TEDxEuston speech went down a storm. He had the authority to do that. He knew the worst of the continent, but he was the best of us.

Komla had real presence. Physically, you couldn't miss him. If you were blind, you would hear his booming voice. If you were deaf, his handshake left you in no doubt. And if you were lucky enough to get a hug from him, the knots were gone by the time he let go. He riffed on everything. What he loved on his last work trip, needing to go to Ghana to relax, the latest quips from his three beloved children. How is Chiko, he'd ask, and the little one. Bros, he would say. His smile. His smile. A warm warm guy.

Death comes to us all, this we know. Sometimes we're prepared, more often we're not. But this feels like an injustice. Komla was just getting started.
Posted by Nkem at 10:40 2 comments: