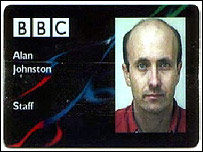 Today marks the 100th day since the BBC Gaza correspondent, Alan Johnston, was abducted. I was at work on Monday, March 12 when the news flashed on the wires on our desktops, URGENT: BBC REPORTER KIDNAPPED IN GAZA. Oh my goodness, I thought, this is every journalist's worst nightmare. But despite tragic situation Alan was in, we all looked to past experience of kidnapping in the Palestinian territories. Olaf Wiig and Steve Centanni of Fox News were held for nearly two weeks last year before being released, a long time by Palestinian standards. And this wasn't 1980s Beirut where Terry Waite was held for four years. We were sure he'd be out soon.

It seemed ironic that he was three weeks from finishing his posting to Gaza, but it was a FOOC he'd written last year which was also a source of mirth for us. He observed that the main fear of being abducted in Gaza was being fed to death. One week became two, and two became three. And now in week 15, at 100 days. At the start, the most difficult thing to deal with was not hearing anything from those who were holding him. Not knowing is worse than knowing, even if it's the worst that we do know.

Then on Sunday, April 15, a random group, previously unheard of, said they'd killed him. But how could we verify this? After all, this is the Gaza Strip, one of the most densely populated places on the planet. Someone should know something. But Gaza is also one of the most nebulous places on earth, there is no homogenous Gaza. Powerful family clans compete with criminal gangs, who compete with militia loyal to one of various political factions. Clarity in Gaza is as elusive as the Scarlet Pimpernel.

A few days after, the Palestinian president, Mahmoud Abbas, said he was alive. This is perhaps one authority that should be credible. But it all came to a head on Wednesday, May 9, when someone finally said they had him, and gave some form of proof - his BBC ID card. We all have these cards, the electronic beeper things that let us into BBC buildings. Al-Jazeera Arabic received a tape showing a picture of his ID, and demands by Jaish al-Islam to release the jihadi envoy Abu Qatada.

But this was still not enough to prove he was alive. We wanted "proof of life", a term used by hostage negotiators, especially common in Latin America. On Friday, June 1, we got what we wanted. A video. It wasn't obvious when it was filmed, but his hair had grown a bit. Somehow though, all I could think of was why kidnapped people are often given the worst fashion (think British sailors in Iran), the red jumper was sooo declassé. Still, there was a good chance he was still alive.

Who exactly are the Jaish al-Islam group holding him? They didn't seem to be one of the known groups, but what we did know is that they are affiliated to the Dagmoush clan, apparently referred to as the "Sopranos of Gaza". The clan also claimed to havebeen involved in the kidnapping of the IDF soldier Gilad Shalit last year. Hezbollah captured Ehud Goldwasser, and Eldad Regev a few weeks later, two kidnappings too far for Israel. Then came the summer exchange of Katyushas and airstrikes between Israel and Hezbollah.

The Dagmoush appear to have some kind of beef with Hamas, and Alan Johnston may be a pawn in their game of not so much wits as bludgeoning. To show how complicated the situation is, consider Hamas's recent take-over of Gaza. Despite Gaza being a de facto Hamas state, Hamas still doesn't control every inch of the territory and cannot decree that Alan Johnston be released by any clan, much less one as powerful as the Dagmoush. There in lies our troubles.

My mama has been very concerned about Alan Johnston. She asks me about the progress on his release; that could be her son, she tells me. And when Hamas threatened the group holding him, she thought, wisely, that going in by force was a bad idea. Why should telling the world what's happening in any given place be a hazardous job, she asks. The face on the ID card shown on Al-Jazeera could have been mine, or any of my colleagues'. We're not soldiers, or hard as it might be to believe, people with an "agenda"; we're mostly ordinary citizens of the world, like you, trying to make sense of the world we live in. We just so happen to have the pens and pads...

It's easy to praise someone when they're dead, or when they've been kidnapped. Because we don't want to speak ill of the dead, or someone being held in unfortunate circumstances. He's a man we all admire at work, because of the sterling job he does. An explanation of his journalism shows why. If you tell the human story, you tell the story. Good journalism takes care to remember the people caught up in extraordinary situations, mostly of someone else's making. I've dealt with Alan a few times while working on Israel-Palestine stories. He was always willing to help, displaying humility and good cheer. I stress this because I've also worked with some correspondents with prima donna tendencies, but not Alan.

In Stanley Kubrick's 1960 film, Spartacus, there's a scene where the slaves are asked to reveal who is Spartacus in exchange for leniency. Instead, they all show solidarity with Spartacus, proclaiming, "I'm Spartacus". If Spartacus will die, they shall all die with him, for each of them has now become Spartacus.

At 1415BST, I will be we with my colleagues in spirit, thinking of Alan.

I'll be saying a quiet prayer that this nightmare ends soon and Alan Johnston is returned to his loved ones. May justice prevail

Let us also pray for all the victims of injustice worldwide.

Meanwhile, welcome back to blogland.

Nice to read from you again...A prayer for Alan

I pray he is released very soon!

Nkem - do keep blogging. (I'm still recovering from the music video.).. yours is a voice I'm interested to listen to ... :)

Wow. You really are back. And with a bang. I held out hope for a while for Alan - He was saying all the right things. But as you say, it is all so complicated and rather whimsical. He needs luck, or God, or Allah on his side. Or perhaps all 3.

I've been checking this space regularly, welcome back.

Apolgies for this shameless plug:-)

Please click on the link below to see how you can get you free tickets to a charity extravaganza in the west end. Performers include Semekor African Dance, Semendo Flamenco dancers, Yes Brazil band and dancers and much more. For a night to remember, click here.

hey pple,blogville idol is finally coming to an end...we have two contestants left and they have sung their songs,pls go to out page and listen to them via our voice player and vote for them on d vote poll..pls leave us a comment too...tank u for ur support thru out the contest

No political or religious goal justifies taking a human life, especially that of an innocent observer. Whereas a few years ago, some may have sympathised with their claim against imperialism, or at least tried to listen to them as rational human beings, these fundamentalist muslim jihadists have become a menance. I almost wish they could be completely destroyed. They terrorize their own people, and their goal is nothing but destruction, violence and hate.

I have just added your blog to a collection of all Nigerian blogs which I am currently building and which can be found here: The Nigerian Super Blog . On the site you will be able to read posts from 197 Nigerian blogs ALL from one place (this number will increase as we continue to add new blog feeds).

The preview version of The Nigerian Super Blog was launched on the 1st of July 2007 and the site is still very much in active development (thus you might experience a bug here and there). We'd be happy if you can find time to check it out (I promise you are going to love it because you will be able to read all your favorite blogs and more from one place!). Plus it will help much more people to find and enjoy your blog.

We'd also appreciate any kind of feedback, (blogs @ naijalive . net) and possibly a post about us. and if you really like the site, please tell people about it and add a link to us in your blog.

Other ways you may support this FREE project is by helping us with links or pointers to Nigerian blogs so that we can add them if they are not already there.

Thanks a lot and keep up the good work!