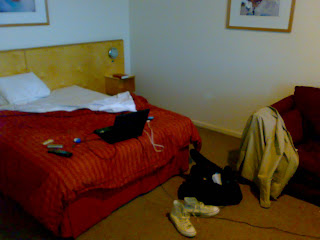 ...make the flight. Got close to the front of the queue, before being told they had reached the magical number of 199, or something. I was mildly peeved, more amused by the incredulity of it all. Airlines always overbook. We all know this. Passengers are fickle as fireflies, and don’t always turn up. So airlines do the sensible business thing by using the laws of averages, probabilities, and possibly physics to make sure they get as many people onto a flight as they can. This being an airline, the “Nigeria Factor” cannot be applied airside, otherwise one can imagine baggage holds and foldable chairs being used to boost numbers.
Things will always go belly up, in Nigeria, Togo, or Germany. What matters is the response to the inverted belly. When Virgin or BA realise that their plane will probably be full, what do they do? They start alerting customers, offering them free tickets, cash, anything. Just so people can continue saying nice things about them despite not getting on a flight they were booked for. Bellview waited until the very end. We were still queuing 30 minutes after the scheduled departure time. Nobody suspected we woudn’t be getting on the plane, because there was no indication of a crisis. Slow checking in, and/or the “Nigerian Factor”, perhaps, but a full plane? Most of the paranoid talk was mainly a combination of jest and good ol' cynicism.
The rub was that we didn’t find out we were going nowhere slowly till the very end. No explanation, nada. Being the English gent (sans irony) that I am (or chicken - in the queue I had joked about staging a sit-down protest on the conveyor belt if we didn’t travel), I went to the man in charge. “The flight is full, we’re sorry. Come back tomorrow.“ It stung as much as I imagine it would a perpetually hungry but dim debtor at seeing the “No credit today, come back tomorrow” sign in Iya Sekira’s buka. Travelling being second only to nothing in stress terms, seemingly law-abiding passengers metamorphosed into irate Tibetan monks in search of a Lhasa Chinaman. No zen-calm Buddhism being practised here, thank you. To affirm the fact of travelling as the preeminent stressful event in life, think of the two best men who weren’t able to get on the flight. And think of the groom, who had to call his future wife and tell her he’d be landing on the morning of the wedding instead of the Friday. Saturday will be a breeze for them. If he makes it.
The Metropolitan police were called after a little verbal sparring between a Nigerian guy and a couple of check-in people. “Fuckienh himmigrant”, ‘e said to dem in d ‘eat of batool. One was eastern European and the other looked South Asian. “Dey tink I’m illegal”. His wife’s white, going to Nigeria for the first time, cafe-au-lait baby daughter in pram. Of course this altercation had no bearing on anything, save some enterntainment for us, and a chance for London’s armed finest to serve and protect. They left after two minutes. One theory was that they’re all immigrants, let them bludgeon themselves to death for all we care.
In the end we were taken to St. Giles Hotel, twenty minutes away in Feltham. We got there at about 1am, checked in, got our instructions that we would be picked up at 2pm today. I got a single room on the 10th floor at St. Giles, four star, right by Feltham train station. Decent enough place, but Bellview did the cheapskate thing and only got us a continental breakfast. And if you know anything about continental breakfast, it can only be described in similar terms to what our old driver, James, used to call rice - “bird food”.

Woke up this morning at five, after just three hours of glorious bedtime. People in Nigeria calling to find out when Bellview will do the decent thing and bring me “home”. I couldn’t fall asleep again, so I watched BBC News 24, picking out colleagues in the background. Just 24 hours before I was one of those pottering about the place. But I was now in a hotel room, having left them, but not quite. I haven’t slept properly since I woke up at 1pm on Tuesday. My eyeballs will pop. I’m sure they will.
We’ve been at Heathrow since 2.30pm, so you can imagine the other cheapskate thing Bellview did was to pay for one-night only. Check-out times tend to be around midday. So I’m sitting here blogging. Then I’ll take a tour of Terminal 2 and all its (non)goodies. Check in at 5. Then Nigeria. Hopefully.
Posted by Nkem at 16:25

This is the sort of stuff you should write for bbc.