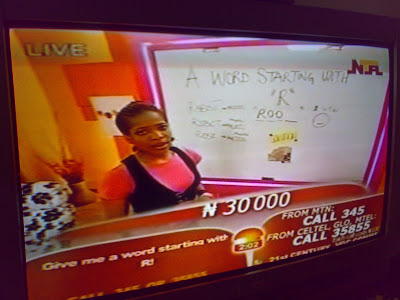 This is exactly the kind of thing that pees me off. Nigeria doesn't understand selective adherance to Western culture. We lap up everything from "abroad" without a modicum of discernment, without question, just soaking it up like a sponge soaks up filthy water. It seems NTA now apparently has those ghastly ITV post-midnight quiz shows, where people pay an arm and a leg to phone in and answer a question they inevitably get wrong. The quiz scandal was the first phone-in palaver before the Richard & Judy and Blue Peter debacle.
In one of the quizzes, they asked, "what would you find in a woman's handbag?" And a couple of the answers, which only a perverted serial killer type would have gotten, were rawl plugs and balaclavas. Rawl plugs and a balaclava. What is she? Catwoman, doing some DIY? Nigeria, being the great importer of all things foreign, has also imported some British tat. The phone lines are crackly as the set is wobbly. That said, a white board is definitely upmarket, considering most school children use blackboards. Somewhere they would have had no problems recruiting, as Nigeria is replete with them, is some "presenter" wittering inanely as she extends the shelf life of whatever ghastly riddle is being playing out.
I remember being upset when Silverbird started a few years ago. I was pleased that we at least had a cinema, but I was also wary that it'd just become like any other multiplex in the world - altars to popcorn and Scary Movie I, II, and III. To some, that's no bad thing in itself. But when people start seeing the arrival of a cinema as the arrival of Nigeria as a viable place to live, I despair. Which is exactly our problem, we love all things foreign, for no rhyme or reason.
But worse still is bloody BEN showing us that bilious piece of television in Britain when we can't even play the game. How, oh how? I feel doubly insulted.
Posted by Nkem at 14:52

Have you heard of West African Idol? We are importing the celebrity culture in its entirety.

Yes we know its crap tv, we only copy but copy rubbish, cinemas are not a sign of civilisation, blackboards dont exist in Nigerian schools, BEN is the crappiest station on Sky...We all know this and thank you for bringing it to our attention.

What are you doing to help improve things? Cos believe me, its quite easy to sit here and moan about the state of affairs in Nigeria as you seem to incessantly do...

You use 'they' when you should use 'we'. And that fly that is undone? Its yours as well my guy bcos we all wear the same trouser as 9jas.

Try as hard as we might, we are all tarnished by the same '9ja' brush (wherever we are). And when that 'draught' blows hard enough (it might never do) you and I will feel it and remember we probably had a part to play but didnt bcos we were busy pointing out the many flaws...

To me, it seems as though the point is whether we will be dropping 'that' colonial name?

Had this post been referring to Ghana ((who executed former heads of state by firing squad)), it would have made more sense? From the gold coast (a colonial/foreign name) it changed its name to Ghana (an African empire that had flourished in the 11th century).

I like your observation, but I still think the point should have been: when in the shortest possible time will we be dropping 'that' colonial name?

True while we do the copy and paste thing from all things foreighn, just like Tinubu lining 3rd mainland bridge with a bus lane...forcing other commuters to squeeze themselves in the remaining two lane brigde and guess what the bus lane is on the wrong side of the road, we drive on the right and our bus stops are on the right but guess where the bus lanes were drawn? on the left so the buses would have to cross leaving their bus lanes to drop passengers on the right... brilliant right? The manner in which we conduct ourselves is kind of funny... while we should strive to adopt cultures that would benefit us such as the transparency with which we are trying to screen our political candidates (although i belive that the thugs will still rig the elections... but that topic is for another day)..

thought i was the only one....just imagine the amount of people that will be getting ripped off and no watchdog!

i swear even the presenters are imported!

People like to complain incessantly about Nigeria and this "all things foreign" debate but please. One thing many people fail to understand is that culture is not a stagnant thing, its everchanging. Just because our ancestors ran around naked covered in leaves doesn't mean because I wear jeans now, I'm rubbishing my "culture". A cinema, a la Silverbird and The Palms, is about modernisation, and many people are happy that their country is joining the "modernisation" bandwagon. Celtel is good, MTN is good. They allow us to join the REST of the world in modernisation. Are we in Nigeria not entitled to watch a freaking big screen TV? what's so "western" about that. IT's a freaking TV, we all watch it so why shouldn't nigerians? I'm so tired of this debate. Me I like my nigeria having internet, cinemas, shopping plazas, cell phones, etc. I like that. I also like Ishara Remo that has none of that (by and large) and is a "country home" I like that. I chose what I want, whenever it suits me. Why do you want the country to remain like it's 1700?