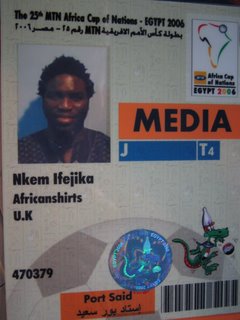 Whenever I go to an African country, it’s inevitable that I make comparisons with Nigeria. In Egypt though, I’m comparing it to Nigeria and Tunisia, where I was a couple of years ago. The similarities between Tunisia and Egypt are obvious, architecture of residential buildings, the boulevards. What Egypt doesn’t seem to do is straddle various worlds as Tunisia does. Tunisia was a place that balanced on a point where Europe, Arabia, and Africa converge. Egypt is more Arab than anything else, and this might perhaps be rooted in its history in Middle East politics. More on Egypt later.

Black people here are a bit of novelty, so the black African press corps walk around waving their hands like they would on the red carpet in Leicester Square. As usual, I arrived without a proper plan, because these things are best done spontaneously. I knew I needed to go to Port Said, since Nigeria is based there, and all the initial groups games will played here. When I landed, I was a approached by a man who turned out to be a friend of Obafemi Martins, and was going in the same direction. So we saddle up together and got a taxi to Port Said. Two hours on the road. Not one pothole, abrasions every once in a while, but nothing a modern car suspension couldn’t handle.

Martins paid for the taxi (he’s apparently very generous), and we pitched up in the hotel – Helnan Port Said Hotel. Since being here, I’ve seen Martins, Jay-jay, and Samson Siasia. The boys have been cocooned, and access to them isn’t easy. Nigerians teams in the past have self-destructed when there’s been a lack of discipline. My first impressions are good.

I’m posting this from the press centre which is packed, but they’ve got wireless internet and sockets for me to power my laptop. I’m ready to rumble.
Posted by Nkem at 12:29

Hello dear, got your text. Glad you're settling ok. Have fun.

Glad you arrived safe and are having fun. I'm looking forward to your reports as I'm sure you've worked out T and I are regular readers. Glad to see Nigeria beat Ghana today. AAA accused me of not being loyal to Nigeria on Sat so it was obvioulsy my change of heart that urged them on to win ;)

what's up with the lighting in your picture. Did u take the picture in a toilet? only joking lovely - you look great. Enitan