My last post was on the 26th of January, a whole four days ago. Did you worry that I had been kidnapped by a militant Islamist group? Had I swam across the Red Sea, when it refused to part for me, Moses-style, after prodding it with a random stick I found in the desert? Had I run off to the Egyptian Gretna Green (if one exists) and married a local woman, my very own Fathia Nkrumah? The excitement was on par with all these, adrenalin hasn't been in short supply in the past few days.

27/01 - Guerilla Commentary
I've met some characters on this trip, but one of the most colourful is a twenty-two year old fella from Ghana. We've nicknamed him "Small Man, Big Brain", sometimes I also add "Big Belly". The reasons are obvious, imagine a tiny man whose brain power is a combination of Shylock and Iago, but for better ends. He is good people. As media men, we have access to all spectator parts of the stadium, but most journalists like to sit in the press box. I knew Small Man was here representing Kyzz FM in Takoradi, Ghana, but I only knew he did daily reports about the progress of the team. For some reason Small Man insisted that I watch the Ghana v Senegal game with him along with the Ghanaian supporters. I obliged. 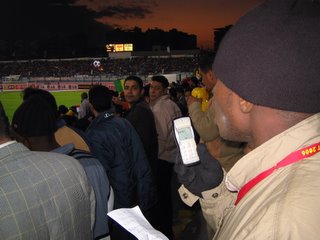 When we got there, he said his station was going to flash his mobile phone five minutes before kick-off. And then they'd call for real just before kick off so that he could start his commentary of the match. Kyzz FM doesn't have broadcasting rights, but the people of Takoradi want to have a local feel to the tournament. This was risqué, but exciting. Small Man (above) started his commentary in Twi, the local language spoken in his part of Ghana. He read out the names of the Ghanaian team, and then the names of the Senegalese team, even telling the radio listeners what colour the players' jerseys were. (Reminded me of the famous John Motson quote, "for those of you watching in black and white, Spurs are in the all yellow strip.")

Then about five minutes into the game, I heard the words, Nkem, Nigeria, and London, after which Small Man thrust the mobile phone into my face, "so Nkem, what do you think about the game so far?" I think I spouted some football cliché about Ghana having started out strongly, maintain the performance for 90 minutes, etcetera etcetera. Then I heard the words again, Nkem, Nigeria, London.

Amidst the din of the Ghanaian supporters, I soon realised there were a couple of other "guerilla commentators" broadcasting live and direct to their hometowns in Ghana. One of the other commentators soon asked for my name and where I was from, and then I did my duty, and gave a thoroughly unbiased journalist's view of the game. It seems I was pundit du jour on the Ghanaian airwaves. In some cities in Ghana on the 27th of January, 2006, bemused listeners heard their Twi and Ga Nations Cup commentary interspersed with a British Nigerian take on how their beloved Black Stars were faring. My Ghanaian radio debut was... the words escape me.

Nigeria played against Zimbabwe after the Ghana v Senegal game, which unless you've been on the Moon (or don't care about football), Nigeria won. John Mikel Obi, who scored and made an assist, is a genuine wunderkind. I've seen him in training with the Nigerian team, and he has the potential to dominate the Nigerian game for the next ten years. He's the only one on the Nigerian team that isn't talking to any media whatsoever, because of his transfer saga. I'm here till the 11th, a scoop would be nice. Mikel, if you're reading... Holler!

28/01 - Sahaafi!
The plan for Saturday morning was to go to the Nigeria press conference, and then head to Cairo for the Egypt v Cote d'Ivoire game. The format of the press conference was: first ten minutes, questions to the manager, Eguavoen, and then mingle with the players. From the press conference I can see why relationships between national teams and the press can be fraught, especially in Nigeria's case. The bulk of the questions were centred around Obafemi Martins not scoring. Was the manager worried? Shouldn't he drop Martins? And more annoying questions. All the players except Obi were there, and they looked sullen faced. I can imagine that if they were fortunate enough to catch some of the journalists in a dark alley, teeth might go missing, and bones might get crushed. The most annoying question was one about "rumours" that players had to have Nigerian food sneaked into the hotel because they didn't enjoy the food. "Do they eat eba and egusi in Bolton, Milan and Kiev", I hear you shout. This man obviously didn't consider this before opening his gob.

I felt sorry for poor Obafemi, he tried to run away after the first part of the press conference, but didn't make it even far as the lifts. I liken journalists interviewing footballers to rape. It seems like a frivolous analogy, but consider this. The players are chased after by men desperate for a story, they're assaulted with camera lights, mics, and recorders thrust in their faces. Their backs are always to the wall, with little room for escape. The questions aren't always well meaning either. The interactions between players and journalists are hardly ever pleasant. It's a shame to use such an analogy, but I can't think of any other with which to express it.

Small Man and I got to the bus station just after 3pm. We had just missed the 3 o'clock bus to Cairo, and the next one was at 4pm. We'd never have made it in time for the Egypt v Cote d'Ivoire game, so it was pointless to go to Cairo. So we hopped into a taxi to take us back to the hotel, and while explaining the situation the taxi driver, he told us that we could get a minibus-taxi to Cairo instead. We got to the stadium at 5.30pm, kick-off was at 7pm, and figured we could eat something before the match. Bad idea. 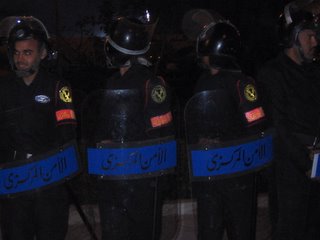 We got to the stadium gates at 6.30pm and met with fully geared up riot police (above) to stop people from going in. The gates had apparently been shut at 6pm to prevent overcrowding. Even we journalists weren't being allowed to go through, so I started shouting "sahaafi, sahaafi!" "Sahaafi" is Arabic for journalist. This didn't work. There were rumours that the main gates were open and that we might be able to go through those gates, the stadium press centre was on that side. Just as we were told this, everyone started to run. This wasn't the time for me and Small Man to slack, so we started running as well. Never run immediately after a meal. Seriously.

There was even more riot police at the other end. People with tickets were gesticulating and shouting furiously, police dogs were barking, the riot police wouldn't budge. The people realised that if they put enough pressure one part of the police's human shield, it would give way. It did give way. The chain was broken and people rushed past unobstructed. Small Man wanted to be civilised about the whole thing and wait for an "official" to take us through. I felt I knew better, this was Africa still, proximity of skin colour and geography to Europe doesn't make this Europe. So we ran like ordinary Egyptian citizens. If only we could get to the final barrier, then we might be accorded some dignity and let through.

I went to all possible entry points shouting, "sahaafi, sahaafi" threatening to print a scathing attack on the organisation of the tournament on Africanshirts the next morning. Nothing. (I wonder what that says about Africanshirts as a blog of great repute). Just at the very last barrier there some people looking like tourists, separate from the chaos around them. Lo and behold, it was "the Trooper", and some new friends he'd just made. I first met him in 2004 in Tunisia at the African Cup of Nations. We call him the Trooper because he's always travelling to football tournaments - Euro 2000, France '98, Euro 2004, Tunisia '04. We had lost touch since Tunisia, but we were reunited after the Nigeria v Ghana game. It was like seeing an old friend, and the fact that in 2004 when we first met, we both lived in East London was a bonus. The Trooper had come to watch Nigeria and Ghana's games of the 27th, but had gone back to Cairo the next morning. We were supposed to meet in Cairo, but hadn't made any arrangements. Small Man and I assumed he was in the stadium watching the game. Fancy see you here!

He was with people I assumed to be American tourists itching to see what this "soccer" business was all about. They turned out to be students at the American University in Cairo, studying Middle Eastern politics, Arabic, and most curiously, Egyptology. Naturally we gravitated towards the Trooper and his entourage. I had been a little hooligan, and now I was being tempered by a Ghanaian East Londoner and some Americans. It didn't seem as if we were going to get in, so did what any normal person would do after such an ordeal. We went in search of alcohol in the largest Islamic capital in the world. I don't drink, so jus d'orange was good enough for me.

The evening finished off on enough of a high to compensate for missing the game. Good conversation, good food, good music, good city. To be continued...