Now, where was I. I forgot a tiny detail about the Ghana v Senegal game. There was a fight among the Ghanaian fans. In that small microcosm of Africa, I could see why there are so many pointless civil wars on the continent. The reason for the fight was simple. Some spectators were standing, so the people sitting behind them couldn't see the game. This all started because the Ghanaian supporters' club at the front of the stands were singing and dancing, which meant that the subsequent rows behind them had to stand so that they could see. Some people told the supporters club to sit down and watch the game, so that those behind could sit and watch. They refused. A man pointed to the Senegalese section, they were singing and dancing. The Ghanaian supporters weren't about to be outdone, so they were going to sing and dance as well. 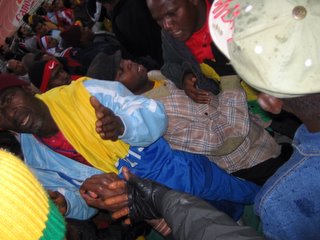 Someone very annoyed, sitting near where I was splashed water from a plastic bottle on those in front, and then someone threw a bottle back in retaliation. Then another bottle flew back to the front. This time, someone from the front charged through the crowd to attack one of the men next to me. If you look at the picture above, you can see the man standing to the right has water marks on his cap and denim jacket. The man second from the right is being restrained, and most of the people in the background are looking back to watch the drama. People eventually calmed down, but not before the intervention of riot police (whose main job is separating rival fans).

The main cause of the fight was that nobody agreed to back down. It was trivial, yet it seemed the stakes were high - like diamonds in Sierra Leone, or banana plantations in Somalia. On a purely superficial level, that is the problem in many African conflicts, nobody wants to be the mug to back down. 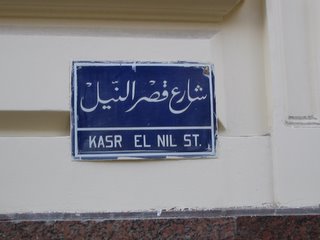 The day after the night before, the Trooper, Small Man and I went walking around Tahrir Square. The aim of the walk was to find food pronto, but it ended up being a two hour sightseeing trek. I had an emotional moment when I realised that I was on Kasr El Nile, a street which had the hotel where my mum and I had stayed when I was eleven. That summer was one of my most memorable. I started that summer in Cote d'Ivoire, and then flew to India from Cairo. The summer ended with a road trip from Nigeria to Ghana, where I was a young delegate for a conference my mum was attending. Kofi, they called me.

I hadn't used my Ghanaian name before, nor have I since. I'd love to say the story about how I have a Ghanaian name is a long and convoluted one. But it isn't. Nigerians love giving names, everyone has to name the child. The paternal grandmother has to give one, the parents have to give several each, even an estranged aunt, whom you've never seen, but had a word of "prophesy" about your birth gets to give you a name. Most names don't appear on birth certificates, but all the different individuals call you by the different names. In my case, Kofi made it onto the birth certificate. My dad went to school in Ghana, and had an affinity for Ghana, kenkey, and highlife music. So he gave me a Ghanaian name.

My mum figured that at age eleven, it was the last chance to take advantage of half price air fares for children under twelve. No half price fares on this trip though, but prices have been quite good. After walking around for two hours, we found a most wonderful restaurant, Felfela. The interior was very kitsch, but this didn't detract from the quality of the food. The menu had autographs of Jimmy Carter, and other ambassadors to Egypt. The man serving us was superb. The people sitting down to dine were the most cosmopolitan group I'd seen in Egypt. Copts, Muslims in traditional wear, Muslims in not so traditional wear, foreigners (like us).

While eating I set up a meeting with Video Cairo Sat. Luckily they were only a few minutes walk from Felfela, on a main road called Corniche El Nile, right by the Nile. They helped me with details about a story I'm chasing, and I also got a chance to talk to some producers and directors about potential collaboration and story ideas in Egypt. All in all, a very fruitful meeting.

After Video Cairo Sat, it was off to the Angola v Togo game. The Trooper had told me there were some rather attractive Angolan women dancing seductively to some Salsa type music at the last Angola game. But wasn't why I was going. I was going to watch football, and it was only because the Trooper forced me to that I sat among the Angolan fans.

30/01 - Back to Bur Said
Bur Said is obviously Port Said in Arabic. We left in the afternoon, but not before having a long conversation with a football scout. What does it take to be a football scout? "Well, speaking ten languages might help a little," said the Dutchman. Cheeky bugger. He was looking for African footballing talent, something he'd done for years. During the course of the tournament, he had become an official scout for Anderlecht. The Trooper seemed slightly envious. Here was a man who made a living out of the beautiful game, searching the globe for the next Ronaldinho or Rooney. The Trooper, on the other hand, has to deal with a desk job as a chemist in the concrete jungle that is Holborn, and make do with the fantasy of football biographies and autobiographies.

The people at my hotel were wondering where I had absconded to over the past two nights. They didn't think I was in trouble though, they only assumed I was shacked up with an Egyptian woman. Way off the mark?
Posted by Nkem at 17:27

Nkem - you are fantastic! G'head with your bad self. You make me feel about as proactive as a slug! Keep on keeping on, we shall overcome baby!!!!