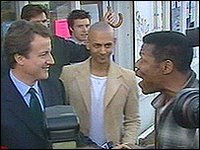 David Cameron has beaten David Davis to the Conservative party leadership as has been predicted since giving that speech at the conference. There hasn't been an old Etonian Tory leader since Alec Douglas-Home (pronounced Hume) in 1964. Before him there were two Old Etonians, Harold Macmillan, and Anthony Eden. Is the Tory leadership returning to its Etonocracy of old? During the run up to the announcement, the BBC was running some tapes of interviews with Tory grandees, Norman Lamont, Gyles Brandreth, and Nicholas Boles. While Nicholas Boles was being interviewed, Rishi Saha (pictured in background) was sitting in the background (again) "doing research" on a computer. Rishi Saha is the poster boy for Tory diversity and inclusionism. He's been close to the Cameron campaign, and I suspect he took DC to the North London community project where DC said the immortal words, "keep it real". I suspect they did with Rishi Saha what all the parties do to look diverse, a Sikh man in a turban standing at the front, a muslim woman in hijab standing to the right. If political parties could resurrect him, they'd probably have Sammy Davis, Jr*, doing handstands.

After the victory speech, DC was ushered by the head of broadcasting during the 2005 elections, Michael Salter. In the crowd were someone called Gabby who was part of the DC campaign team, and of course, Rishi Saha, who received a special handshake from DC. If Rishi Saha leaves his Brent South seat, he will get to run for a safe Tory seat in 2009/10, that is if he doesn't get a by-election before then. Mark my words, you heard it here first.