Cherie has a big bum 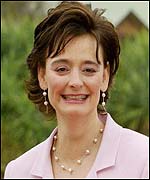 The Prime Minister's wife, Cherie Blair, has a big bum. Now, this is no bad thing. Big bums are in, I think... She's just spent one hour on our screens on a programme, Married to the Prime Minister. Channel 4 being the paragaon of tact, decency, and good taste, would have wanted to call it Shagging the PM, or the PM and his Hos, but Cherie probably laid down the law. And Dennis Thatcher being a man would not have helped the image of middle aged women dusting Number 10, wearing nothing but an apron, a pair of knee-high rubber boots, and a smile at the ready. The programme looked at all the PMs' partners since the war, and how terrible the scrutiny was and still is. During an interview, Harold Wilson's wife, Mary, was asked how on earth she could hope to organise regular meals, considering her husband's schedule was so irregular. Oh the travails of being married to the PM! It's a mark of how times have changed that, forty years on, nobody would dream of asking any PM's spouse such a question. They missed out a classic Dennis Thatcher quote: when he was asked by a journalist about who really wears the trousers in the house, "I do. I wear the trousers. And I wash and iron them, too," said he.

I can never understand why Cherie gets so much stick in the media. She appears to me to be perfectly charming, and I like her. Then again, I do like them slightly greying, skin slightly folding, a bag under an eye here, a hip replacement there. But I drift. If not for Cherie Blair, Tony would have privatised our breathing of air. He would have initiated some public private partnership where the right nostril is financed by the private sector, and the left nostril, by the public sector. Deep down inside Tony Blair is a Tory, his father being a Conservative. Cherie must have been his motivation for becoming Labour.

The Cherie/Tony dichotomy makes me think about people's politics and their relationships. Cherie is clearly leftist, and Tony is clearly rightist. Can a house politically divided against itself stand? Arnie married Maria Shriver, a Kennedy, a blue blood Democrat if ever there was one. Now he's the Governator, and she voted Republican during the California state elections. I dread to think that I might be in a union with someone of a different political hue. I have had a Tory girlfriend before, but she was on the left of the party. That's my excuse. I reckon that women will get the man they want regardless of political stripe, it's the men that make noise about politics and all that jazz. Who cares about politics, love conquers all. Right?
Posted by Nkem at 22:28

No way - you are a liar - YOU HAD A GIRLFRIEND