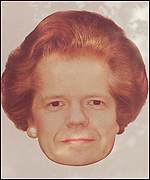 David Cameron's shadow cabinet reshuffle has missed a trick. There's the obvious emphasis on presentation, rather than substance. Malcolm Rifkind who only just came back into Parliament as the MP of the ultra-safe Tory seat of Kensington & Chelsea, has been vehemently against the Iraq war. William Hague, who's just replaced him as shadow Foreign Secretary, voted for the war. Iraq is still the major reason Labour shed so many votes at the last election, and DC (who voted for the war) could have had Malcom Rifkind hitting the government hard on the Iraq issue. But William Hague is a Tory favourite, Margaret Thatcher without the handbag and bouffant hair, in fact, Hague is bald. But having already given David Davis the shadow Home Secretary, and given his bessie mate, George Osborne, shadow chancellor, there was no way he'd have given Hague something vacuous like health or education. Rifkind would have been a good early attempt to put clear blue Tory water between him and Tony Blair.

Hague though, has not lost his Eurosceptic stripes. And this is probably the main reason DC has appointed him. Hague lost two elections on Euroscepticism, and here he is again, at the forefront of British anti-Europe. Same Tories, new clothes?
Posted by Nkem at 10:56

Indeed it does look like Same Tories, New Clothes.

I was more shocked by the lack of preparation by the Labour party for the first Cameron vs. Blair PMQs.

You'd think that Cameron's repeating "No more Punch & Judy Politics" ad nauseam would have given them a clue.

Labour is going to to gift the election to the Tories with such shoddy preparation.

Whilst I do vote conservative and would like them to win an election in the near future, they shouldn't get it on a plate, otherwise it promotes the complacency and running rife in the labour party.

I take your point about Rifkind - I was disappointed not to see him get a post too.

However, I think bringing Hague back onto the front bench is positive, and he deserves a top job. He's a very capable politician.