Be ye not afraid of the BNP 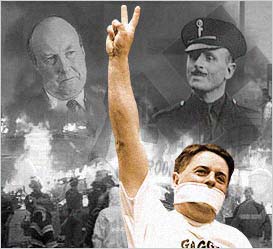 One the many highlights of the Thursday's local elections, was the election of 11 BNP councillors in the London borough of Barking & Dagenham. By the end of the night, the party had doubled its number of councillors countrywide, with multicultural, multiethnic, multireligious, multi-everything else Barking the source of many of the councillors. I lived in Barking for nearly a year after I left university. There wasn't an icicle's chance in hell of me moving back in with my aunt (bless her), especially after years of university independence where I came and went as the whim took me. So I kipped with my cousins in Barkers.

Given the 1960s style free love that flowed between the Nigerian guys and the white girls in Barking, one would never guess that there were any racial tensions. But such is the nature of these things. The election of the BNP and the reasons for their ascendance have thrown up some weird paradoxes. The BNP sometimes threatens to be succesful in all-white areas that have no immigration problems, with the locals citing "fears" as their reason for contemplating support for the racial nationalists. The BNP also tries its luck in diverse communities that have lived together for decades, picking at scabs that exist. Whether each racial grouping lives in its own bubble, without interaction with the other groups is another matter, but they would have lived in the same space for a long time. Areas in the north of England such as Burnley and Oldham have had Pakistani workers since the 50s and 60s, so immigratiomn is hardly a new issue.

Many people don't know what the BNP stand for. Before the election, some voters said they would vote for the BNP because, get this, they felt their jobs were threatened not by black Africans, but by Eastern Europeans - the so-called Polish builder. If the man had done his research he'd know that the BNP is in support of keeping Britain free of "non-European" immigration. He'd puts an X beside the BNP on his ballot paper thinking that he's voting against EU expansion to the east (or at least all immigration), but he's unwittingly voting in favour white pan-Europeanism, of which Polish plumbers are an integral part.

Of the 22,000 council seats the UK, the BNP now has 44 seats (controls no councils), a mere 0.2% of the total seats. This is not the performance of a political force to be reckoned with, or one that could find itself with a seat in parliament. If this is compared with Europe where there are BNP-esque parties in government and in oppostition - such as the Austria's ruling Freedom Party, the National Alliance in the Italian, or even the Front National garnering 5 million votes in the the French presidential elections of 2002 - the BNP has far to travel.

Whenever far-right parties seek power, they have to undergo several transformations, cosmetic or otherwise, to be voted in. The BNP has undertaken a massive rebranding programme, calling themselves nationalists, dropping several key tenets of their ideology. For example, they are against miscegenation (I detest that word), but Nick Griffin (bottom of picture) has said that even though he doesn't agree with it, it's a private matter which he has no desire to legislate against. As they carve their extremist ideology at the edges, they become more electable, but lose the original vitriol that characterised their political discourse. If they didn't do this, nobody would vote for them.

Even though power corrupts, power also tempers. Extremist parties would have been on the fringes for so long that they don't realise how complex the actual process of governance is. Even if all dark skinned people accepted the BNP's policy of "voluntary repatriation", such a measure would not improve transport, provide nurses, or even improve rubbish collection - the issues voters care about. The parties often can't carry out their proposed agenda because most countries have an opposition. And the opposition when an extremist party governs, is more primed for a fight than it would if a mainstream party was in power.

What tends to catch up with extremist parties is losing the faith of the very people who elected them. In Palestine, Hamas has shown this very trait. Over the weekend, police in Gaza staged violent protests against a government which has run of funds to pay their salaries. Such a failure registers in the minds of voters, and come next elections, they might well turf them out. Voters realise that these people are all talk and no trouser. Nick Cohen talks about the BNP in today's Observer, recounting how useless they actually were as councillors in Burnley and other cities. The beauty of democracy is that voters can chuck 'em out in a few of years, or if out of desperation - impeach them.

Barking has nothing to worry about. If anything, the voters (especially ethnic minorities) will realise that they cannot sit at home and watch Three Pints of Lager on election night. In the wards with BNP victories, the turnout was as high as 40%, way above average. As they say, people get the governments they deserve - and this rings true whether one votes or not.
Posted by Nkem at 12:35

Hey, I really like this piece- I can just see it as commentary in some newspaper (not tabloid). Well done

It makes you wonder if the exercise of franchise in a democracy should be elitist or egalitarian.

The former requiring voters to fully articulate their understanding and appreciation of the logic of their choice of ideology.

The latter that allows rhetoric, bluster and populism to attract the crowd and mob to a cause too despicable to elicit in polite company.

From your analysis, it appears the elitist mould might become a viable option - rotten as the idea seems.

That was quite an impressive commentary, I was drawn in and thoroughly educated...excellent!

The sad side of the story was that there was enough black populace to have resisted BNP getting in power but where were they on election day? They were all at work!

The interesting development by 10.30am on Friday (May 5) was that almost all staffs that will be required to work with the elected BNP LBBD councillors have opted not to work with them - this included even the white staff members. Union leaders were so impressed and everyone is studying what this will lead to.

My hope in future elections is that there will be a better turnout by black folks - how better can the message be passed across to them? Remember, one of BNP campaign stunt alleged that Labour government was paying between £35,000-£50,000 of our mortgage for us! and the result shows people believed them.

Anyone interested in the BNP's rise - from either side of the argument - may also be interested in this site - http://www.notfair.co.uk - which is collecting responses from MPs (as well as the public) as to WHY they think the BNP is making such gains, and what they think can be done to stop them.

It's a site from a political theatre company who have a play on in the West End later this month which tackles the issues head on. Very timely and very worth checking out...