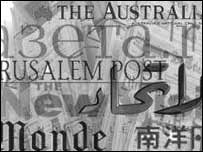 "88% of Nigerians trust their media", is the deduction from a recent worldwide survey. Oh, woe is we! How can the Nigerian media, which can be, at the worst of times, chiselling little crooks (to borrow from Red Ken), and at best, as pathologically honest as Pinocchio, be trusted so? All media should be consumed with healthy dollops of salt, and viewed with sufficient scepticism. The media is shady in the most honest of countries, how much more in Nigeria where corruption is as common as rice is in China? Hell, I'm a journalist, and even I don't believe everything I write!

Perhaps I'm exagerrating slightly, but the figures jumped out at me. More than anything, it illustrates the mistrust with which the Nigerian government is viewed. One only has to look at the Bellview 210 plane crash in late October when the government said the plane had crashed in Kishi in Oyo state. It transpired that the crash site was actually in Lissa in Ogun state, more than 200km off the mark. The government then shut down AIT (which found the crash site), claiming a breach of broadcasting codes of conduct.

I blogged about my experiences in Egypt, where some of the journalistic practices were somewhat iffy. A fair bit of the news in Nigeria is still government propaganda: today the minister of health opened a clinic (should he be opening grenade factories?), the governor's wife visited a motherless babies home (at least she isn't selling drugs á la Maryam Babangida), or get this, today was the commissioner's sister's granddaughter's christening. This is the claptrap that passes for news.

At university we had a Chevening Scholar from Nigeria who was researching the role of the media in ethnic conflict. He gave an example of a typical domestic dispute in a place like Ajegunle. A man takes the chicken of his neighbour, they fight, and as sometimes happens, someone dies. The next day, the headline will apparently read: MUSLIM KILLS CHRISTIAN IN CHICKEN FIGHT, or vice versa. Quite how the story goes from a simple chicken acquisition to the return of the Crusades, we will never know.

However there is some good journalism happening in Nigeria right now, but not on a grand enough scale. Many of the EFCC investigations have been aided by investigative reporters trawling through the political underworld for potential dirt. In some unexplainable way, I've also been fascinated by some of the tabloid journalism. The Sun does a wonderful job of mimicking Rupert Murdoch's red top scandal sheets, the Sun and the Screws of the World. My mother's neighbours even featured once, after some man-leaves-wife-for-other-woman-then-goes-back-to-wife-then-other-woman-pours-acid-on-man, or was it wife? I'm no defender of tabloids, but I have to admit that they do their human interest stories well. Nothing riles a man like some injustice amplified by a tabloid.
The Nigerian government should be ashamed at the figures, and should take steps to rebuild public trust. The Nigerian media should also realise the amount of power it has, and wield the pen with brutal abandon (you could argue that given the rubbish writing, they already do that, although more reckless than brutal). They should lop off the heads of the kleptocracy, instigate mass but constructive hysteria, offer no succour to citizens involved in any dodgy dealing. Attack, attack, attack. Yeah, and also, act responsibly-ish.
Posted by Nkem at 06:23

and wield the pen with brutal abandon (you could argue that given the rubbish writing, they already do that, although more reckless than brutal).

I fell off my chair laughing! I have the hardest time deciphering what interpretation of the english language the newspapers are being written in. By the time I'm done code-breaking I'm usually too tired to take notice of what claptrap they are reporting!

Nkem, given the environment and the dusty terrain--plus tight-lipped politicians, the Nigerian journalists I must say, are really working hard.

That is a country where with a single fiat, an establishment is proscribed--you can't ask for more...

There is room for improvement though...
And I think the print media has faired a thousand times better the the electronic...'non-partisan' to some extent.

At least we have journalists like you to save the day, eh :-)

Dude, i know you're a journalist but i have to say i dont trust anything i read, hear or see - there are just too many people out there representing their own interests.
Its like newspapers are clearly party oriented - you read the guardian and you're reading a labour paper...and then you read the times and its almost like the damn thing is edited by William Hague's long lost dyslexic cousin who is secretly in love with David Cameron's step auntie. i find that i invest too much energy and time into deciphering whats true, whats utter rubbish and what angle they're coming from to really appreciate what they're trying to say.
Hence i read mind-rot tabloids which are very informative with regards to the key issues of the day, like what colour underwear Cameron Diaz was wearing when she slipped over and fell when she popped over to get some milk at her local grocery store.
Note: i see just like our British counterparts, the Nigerian sun also have a "Sun Girl" column. i wonder whether in a few years to come they'll go the full monty and stick them on page 3...of course with a big smile, and of course without the bra.
THE SUN - YOU LOVE IT!

I beg to disagree. Yes, Nigerian newspapers tend to be crap, in terms of content, layout, language grammar etc, but they do tend to have "genuine" public interest at heart as opposed to the grossly ideologically skewed reporting you have in the UK- which is why the Nigerian public trusts them. That was one of the things that struck me when I moved here not too long after the Abacha years- I'd seen the press as defenders of democracy, and fairly non-partisan and so was slightly surprised at the situation in the UK where epithets as"Telegraph reading" and Guardian reading are flung casually and everyone knows exactly what they mean....

uknaija. Nigerian newspapers do not have any "genuine" Public interest at heart. If they did, their pages wouldn't be filled with just stories of political rivalries, and nothing whatsoever of government policy, opposition proposals etc. Have a look at Nigeriaworld.com and see what I mean. 90% of the stories are about politicking, factions, third term, blada blada hoot. What I'd like to read about is the government's poverty reduction policy, education policy, health policy, and where the opposition think the government have got it wrong and wrong, and where they've got it right. They should talk about leper colonies, villages built on stilts, Biafran flags flying in Onitsha. That's what I'd want to read, but instead we get "what's Lagos big girls are wearing", and vacuous wedding pictures of insignificant people.

The newspapers carry nothing about policy because in Nigeria policy matters very little- what really matters is personalities- sad but true...The newspapers could spend the next 100 years publishing policies and opposition responses to them and it would cjange nothing plus it would bore the hell out of their readers- the columnists Reuben Abati and Segun Adeniyi for instance understand this and so even when they try to address wider structural issues, they still comment on personalities because they appreciate that often, in Naija, the personal is the power driving government action not policy