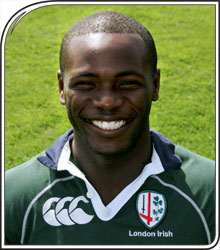 A Nigerian rugby player, "Topsy" Ojo (pictured), won an award for try of the season. Nigeria apparently have some special monkeys, which were observed in a Nigerian national park, apparently. One would hope that the intelligence of the Nigerians isn't diffusing from the people to the animals. But given the mind boggling dumbness that passes for political discourse in Nigeria, one could be forgiven for thinking the country might end up with a Planet of the Apes scenario. To quote Taylor at the end of the film, "You maniacs! You blew it up! Ah, damn you! God... damn you all to hell!" Nigerians are a capable people, capable of screwing it up. And you know what? Even though religion is one of our sicknesses, only God can deliver us from ourselves. How's that for a paradox?

One can only hope that just as the solar eclipse was a chance to engage young people in science, this will be an opportunity to engage some in biology. What are we doing letting people who live near the North Pole (St Andrew's) flying all the way to the equator to study our own monkeys? Shouldn't we be publishing this stuff ourselves in Nature? Wake up people!
Posted by Nkem at 11:08

From the time we were taught Mungo Park discovered the source of River Niger for the locals as well as the West, it has taken others to help us realise what treasures we have amongst us.

With every parent wanting their child to become a medical doctor, engineer, lawyer or accountant - what chance has anyone studying archeology or anthropology talk less of studying monkeys in Nigeria.

Just like in the times past in the West, we are yet to get to that stage of wealthy explorers and researchers who funded their escapades kindling interest to get additional funding.

However, as you rightly point out, someone coming from Scotland to show us things in Nigeria is a bit like rubbing it in.

However, the knowledge is good for mankind - until professions and academia are seen are self-sustaining without recourse to seemingly get-rich-quick careers in basic IT and retailing - this would be a lament rather than an opportunity.

"...What are we doing letting people who live near the North Pole (St Andrew's) flying all the way to the equator to study our own monkeys? ..."

"...someone coming from Scotland to show us things in Nigeria..."

Nkem, I can understand your point but isn't that just a wee bit racist, it wouldn't matter if the person was from timbuktu, any help from anyone anywhere should be greatly appreciated.

Is it not the case all over the globe in universit6ies, colleges, schools etc that people "learn".

For example, I was an international research student many years back but did not in my discovery have any issues with who was teaching me and vice versa.

It's not at all racist. I'd be just as upset, if it took a Cameroonian academic to point out things which exist in our environment. I was merely decrying the inadequacies of Nigerian academia, because I can hazard a guess that there were no Nigerian academics involved in the research - apart from maybe gatemen and gamekeepers.

"...I'd be just as upset, if it took a Cameroonian academic to point out things which exist in our environment. ..."

What if this very same people you refer come up with a cure for malaria in the African environment, would it upset you?

Obviously not, however, environment could be a very loaded word in this context.

It could have a very general definition, however if we are not imposing any strict definition, what would you say about the programming/computing environment and what was pointed out by the so called “father of the internet”: Dr. Philip (Emeka) Emeagwali, an intellectual and professional of Igbo descent, and of note. President Clinton referred to him as one of the “great minds of the information age”. He was born on August 23, 1954, in Akure, Nigeria, the son of James Emeagwali, a nurse's aide, and his 16-year-old wife, Agatha.

“…Philip Emeagwali worked out a theoretical scheme for using 64,000 far-flung processors. He called it a HyperBall international network of computers. Denied funding and employment for a decade, he quietly developed and wrote up his calculations in a thousand-page monograph which described the hypothetical use of 64 binary thousand --- the equivalent of 65,536 --- processors to perform the world's fastest computation.

Emeagwali's discovery started making front page headlines and cover stories in 1989, a feat that is a rarity in science. ..”

Let them continue conversing with our monkeys!