No, it is not a summer shirt 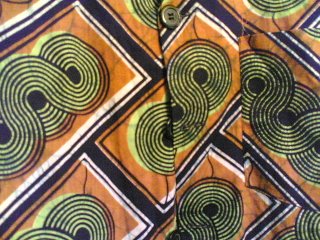 My blog is called African Shirts for a reason. I lurve African print shirts. I wear them as a *fashion statement rather than some militant adherence to negritude, or that I have a shrine to Mother Africa in the corner of my room. The fact is that these are shirts (and short trousers) I used to wear when I was in primary school in Nigeria. There is no reason whatsoever why I should stop wearing them now in my twilight years, unless I was ashamed of them. In my teenage years when one might have been more inclined to ditch African shirts in favour of the ubiquitous Tommy shirts, jeans, and Timbolos, I stood fast and wore my shirts with pride. The key was my mother. She always made very fashionable shirts with the well-chosen local material, and they always matched perfectly with contemporary stuff like jeans.

Fast forward to Her Majesty's dominions aka England. I was in the land of Oxford Street's human traffic shopping, a hop, skip, and jump, away from NYC, and Paris was on the other end of the Chunnel, haute couture, or something, should have been screaming my name. It was screaming my name, but I wasn't listening. If I listened, I would have looked like every other Thomas, Richard, Harold, Kumar, and Wazobia child out there. My dad doesn't call me the "non-conforming conformist" for nothing. Fashionable status could be attained on the cheap, with shirts ferried in from Mama in Lagos, funky jeans still remain, and footwear would be mix of Timbolo, and And1s. Non-conforming conformist.

My wardrobe has reached a stage where it's about half African print. The intention is not to totally replace Western style clothes with shirts from the motherland, but having enough for it to be a wardrobe on its own merit would be a worthy achievement. This whole exercise is pointless if I only wear this kind of attire to Nigerian/African events, so I wear them everywhere. I mean everywhere. I've worn them to interviews, meetings with executive types, to work. If they don't like it, they can sue me (I've slandered/libelled too many people, so I have my lawyers on speed dial). Now, I work in the creative industries, so I could probably get away with it more than most. Eccentric dressing can almost be a badge of honour in the media, but African shirts? That's just taking the mickey.

If you wear African shirts in south east London, where I live, nobody bats an eyelid. Peckham, Lewisham, Woolwich - African shirts central. But as soon as you wear them in more, shall we say, genteel circles, the sirens start to wail.

So I'm at work, right. And I'm in the toilet, doing a number one in the urinal. And this dude who, like, sits near me at work, and he looks like he's also doing a number one, he says to me, "that's a cool summer shirt". So I says to him, "summer shirt"? and I looks at the shirt I'm wearing (pictured, top). I agree, it's a colourful number. Some (mainly British people) might even say the combination of patterns and colours is a bit hypnotic and blinding. I can appreciate that, but summer shirt? Wait just one minute, you'd never find this shirt on Miami Vice or Hawaii Five-O. So I says back to the dude, "this is no summer shirt, it's an African shirt, and I wear it in winter as well." All this while, I'm washing my hands and trying not to call him an ignorant pompous English twit, because really he isn't. But that's how I'm feeling.

This is just a slight illustration of what I have to deal with regularly. I can remember going into the BBC offices once, and my one of my colleagues said to me, "you look very Nigerian today". And of course I said, "well, erm, I am Nigerian, you know".

But of all the African shirts stories which have dismayed me, was in Nigeria a couple of years ago. I went to a party in this dodgy place called Victoria Island. It's supposed to be a posh part of Lagos, but the safari grand prix roads had too many gullies and pot holes to convince me. I wore one of my favourite African tops, not thinking twice about it. One thing I had told people in Britain was that African shirts aren't odd things, they are everyday fare for people on the streets of Lagos or Bujumbura. Market men wear them, marker women wear them, it's what we wear. However, in Lagos, on this very night, my African shirt was not everyday fare, but the exception. The sole exception. Over a thousand black people at a party in West Africa, not one person wearing African style clothes of any type. Tragic.

And it is due to such incidents that what is simply the covering of nakedness becomes a political act. Wearing an African shirt goes against the grain wherever you are. It becomes an act of rebellion thrust upon the wearer. This shouldn't be so, as we needlessly politicise clothing. It is the act of nakedness which should be rebellious, not the act of clothing oneself. 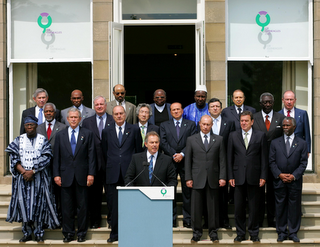 I think it is also interesting to note that OBJ never wears Western style clothes. Look at last year's G8 summit picture, OBJ and former Malian president Alpha Oumar Konare (in his capacity as AU chairman) are in traditional gear. From left to right, the Senegalese president Abdoulaye Wade wears a suit, so do Ethiopia's Meles Zenawi, Tanzania's Benjamin Mkapa (is that a dog collar?), Algeria's Ahmed Bouteflika, Ghana's John Kufuor, and South Africa's Thabo Mbeki. OBJ obviously exudes a pride in his Yoruba heritage, setting an example his countrymen should be following.

The wonderful thing about Nigeria's National Assembly (yes, wonderful and the NA in the same sentence) is that the senators and congressmen tend to wear traditional attire. While many other parliaments in African have men wearing drab colonial hand-me-downs, Nigeria gets bold and colourful dressing, a true expression of the constituents they represent. There is a practical element to all of this, which is that suits are notoriously unsuited to the Nigerian heat. Yet bankers, accountants, and all the other pen pushers insist on their ridiculous T.M. Lewin status symbols. Heaven forfend!

*Disclaimer: I am neither a fashionable, nor a poet. Just unfashionably unpoetic.

ahh haa...
Nice one. I love African garb and I wear it as long as the weather permits or when I'm driving (but don't do that anymore so it's strictly a weather thing).

On wearing one of my get ups an 'enlightened (widely travelled) colleague at work loudly proclaimed...'what is this about then!'. To which I responded: 'It's about putting clothes on when coming to work'.

And that's exactly it for me, it's not a political statement it's about wearing gorgeous clothes and something that is actually tailor made for me, I get to dictate the fit.

The irony is, on my return to Nigeria, my aunt would not let me tie any of the wrappers I brought along with me, as apparently the materials used were soo obviously of poor quality, that it would be a sin to allow me out of the house in them lol. I stuck fast to wearing shorts (in that mind numbing heat) until I could get replacements for my traditional style clothes.

I am inspired, and have to admit that I am guilty of neglecting my traditional attire. A big reason for that is the fact that when I was growing up the pickings were slim {read iro and buba or boubous}, and I just didn't feel that comfortable in them. However, I am now realising that I have been limiting myself, and seeing it as a statement as opposed to who I am. I will be putting the wheels in motion, maybe this time next year my blog will be called African Dresses. I imagine the British Goverment will love me arriving at work in my Nigerian garb, but who cares?

Lol @ 'timbolos', i don't remember the last time i heard someone call them that (never owned a pair, never will). African shirt thing is cool if u can pull it off without looking like a refugee. i can't.
you do know that there are different grades of materials for african shirts and those folks in the NA are just getting their naija savile row floss on and would actually wear suits if they could be bothered to lose weight. african shirts are one thing african pants are another thing and don't require belts

I love wearing African clothing too but not to the luxury of wearing agbada. I make sure they are smart and they have caused some controversy at work as par not being official - after the third time I heard such statemnt from my line manager, I asked if that is not a way to discriminate my clothing? If muslim dressing can be tolerated because of their faith, then I think they should respect my culture! I caused a serious storm in the management because of this and they are yet to get back to me, ten months on ... I keep wondering if they'll ever get back to me or have I won my argument by default? I already have more weapons to throw at them if they bring up the issue ever again. Perhaps they will tell all staff to start wearing uniform because of me.

I can get my head round why many Africans aint proud of the dressing heritage they have - I am proud of my - Have you tried using fila ab'eti'aja during the winter? It works quite well.

@anonymous, I'm giggling! They have no legal argument against it, so I doubt they'll ever get back to you. More power to your elbow.

@too me, I know there are different grades, which is why I let my mum pick the material. But still.

Ignoring African attire, are I guilty too, but what about the african God?

Great post!!
Yes oh...
I love African dresses. Sadly i do not own enough of it, I wear them to parties, but as soul said, its strictly a weather thing, if it permits me i would wear it, if not it sweaters all the way.

My work, infact they take pictures and oooh and aahhh everywhere.

one of the best things about being back here is sewing cute dresses and shirts, and I am building up quite a collection...I just had one sewn in town and it is this golden yellow ankara with bright red splotches of tie and dye. I love it!

Thank you so much.I think this is a great article about African wax print.It is very impotent for every one. Anyone can know many thing about African print from your article.

great article. thanks for sharing .We have a great collection of African fabrics. Good quality at lowest price. For whole sell price Visit us hope you guys love them.
Sequin Fabrics

Thanks for that African fabrics and that collection is traditional.

Thank you for sharing this article. Nice to see this. I found some excellent fabrics from Spandex Collection in NYC near me which was a nice weight, not too beefy.I hope you would also like those fabrics.
Stretch Sequins
Glitter Stone
Designers Lace
Stretch Lace
Printed Spandex