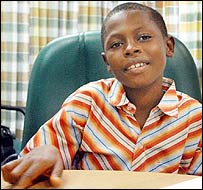 An 11-year-old boy Aloysius Abacha has ben found stranded at the international airport in Dhaka, Bangladesh. There are very few details about how Aloysius ended up 6000 miles and 5 time zones away from his home country. But it wouldn't be presumptious of me to say that someone has tried to smuggle him to Europe, and something has gone wrong somewhere.

The person he came with probably has one of two intentions, which would be to

It appears like a circuitous route to take to get to Europe, but as Fortress Europe strengthens its borders and direct links to Africa, going via Asia doesn't seem so daunting. That said, Bangladesh could also have been an intended destination. Why? I don't know, but Nigerians appear to want to go anywhere but Nigeria. Whatever the intentions of the smuggler, an innocent child is being trafficked across international borders, and being left stranded in a strange land.

Who knows if the boy is really 11, or if the name given is real. He might just be giving a pre-planned spiel. Either way, the boy is a victim in this, and we need to stop treating our children like Dickensian pieces of property.
Posted by Nkem at 12:13

Nice post. I had read the boy’s story on Akin’s blog and IOM in Bangladesh has been contacted. I’m sure they’ll do their best to solve the riddle. I digress from the post and I ask you to forgive me but it’s just my thing about separating trafficking from smuggling. I wrote it here.

Good point. Duly noted. But rather technical. Will make the distinction in future.

What kind of name is Aloy Abacha?

I just hope that those in Bangladesh are clued in on the possibilities.

However, I suppose IOM knows that MO of these matters and this would be resolved soon.

If you are interested in knowing which countries are involved in trafficking, of whom, where to and what for:
http://www.blacklooks.org/2006/07/trafficked_and_trapped_.html
and thats just the beginning.

This is just sad. This will go on until we make our country condusive (sp) to live in. Saying that though, Naija is just a drop in the ocean where children smuggling is concerned. Good post.

it's terrible to have to be in that position. I mean i remember travelling as a kid as an "unaccompanied minor' and that alone was scary...not to talk off being in a strange land...

i honestly dont know how this is going to stop...i can propose solutions for different things that ail us...but this...

Why? I don't know, but Nigerians appear to want to go anywhere but Nigeria.

Well done old man, people need to know these things. It is true that Nigerians want to be anywhere but Nigeria, even the politicans and people in power...

thats not all my friend, there alot of "trafficking" going on with these fucked beyond redemption.what kind of name is aloy abacha? i know a cooked name when i hear one! Nigeria is been pushed to the edge everyday.why?