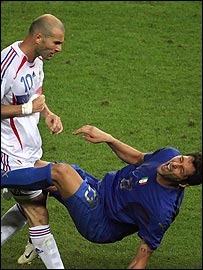 This was supposed to be his swansong, his sign-off, his final defining moment. It started off being his defining moment, but the reasons changed after the headbutt. He had scored an audacious penalty, threatened a repeat of the 1998 final when Buffon saved his header from point black range in extra time. He bestrode the pitch like a colossus, along with Henry, and Malouda, who played his best game of the tournament. The previously impenetrable Italian defence kept being carved open Christmas turkey style by France, and Zidane looked like doing it again.

And then the red mist descended. What did Materazzi say to him? One hopes that he insulted his mother, father, children, spat on the tricolour, and called him an Algerian camel to boot. But hold on a second, even that isn't enough. When you hear the phrase "unprovoked attack", you automatically think of a street thug assaulting an innocent person going about their daily business. Today, Zidane was that thug, and his attack on Materazzi was an arrestable offence. If that incident had happened anywhere other than on that pitch, he'd have been clapped in the stocks by the German Polizei.

On the day, France deserved to win, but in the grand scheme of the World Cup, Italy deserved victory. But what was shaping up to be the best World Cup final since 1986, ended as a ruined final, and probably ruined the World Cup for me. The most anticlimactic day of my life. More than a billion people were watching that madness on television. If he wasn't already retiring, he'd have been banned for a long long time. I was kicking myself for not making it to the match in Berlin because of a paucity of media tickets, but afterwards, I was glad not to have been there. I'd have been too downcast.

The World Cup was incredible, but I fear Zidane's behaviour might have ruined it for me. Zidane has showed his madness in the past - suspended for a stamping incident in 1998, suspended for the final group game against Togo this year, after picking up two yellows. Jean Marie Le Pen must be thinking, "I told them not to let that Algerian racaille play for Les Bleus". But Zidane is fallible. Zidane is a mere mortal. If he wasn't fallible, he wouldn't be human - he'd be God. Alas, no man is God. Congratulations to Italy, but what happened on that pitch?
Posted by Nkem at 22:09

I'm still reeling from shock at what he did. You'd think all Zidane's experience would've prevented him from pulling a Rooney, I fear he is about to go from being a legend to a cautionary tale.

I loved that headbutt! Since France didn't win, I can only take macabre pleasure in watching the headbutt over and over again. It was his last match anyway, and he probably thought 'F*ck it, why the hell not!' and gave the guy a good Algerian back street headbutt. The only reason for a smile on my face in the light of the disgraceful penalty by his countryman, who should be whipped for having missed such an easy penalty.

So my point is LEAVE ZIDANE ALONE!! He's not a wimp, and he's not a hooligan. I'm sure the guy deserved it. Let Zidane go peacefully into retirement!!!!

Hmm... Why did the whole of Nigeria go quiet after the match? Is there a pact with France that I don't know about. Now, even Nkem says "The most anticlimactic day of my life".

Let the storms calm and let's hear what Zidane has to say.

It was a "nipple tweak".

Zidane's headbutt was awesome. Materazzi was provoking him w/ trash talk and a nipple tweak. Any sport that entirely protects idiots like Materazzi from harsh, but not dangerous, retribution isn't worth playing. Zidane made the right choice and made the highlihgt of the game. This play was a good counter to all of the flopping and whinning that went on through the entire tournament (I'm looking at you Portugal). I can't wait for the next World Cup... more headbutts!!

h8torade:
What? Did you just say Zidane sucks? Did you not watch the youtube scene you posted? Did you not see Materazzi twist his nipple and whisper something in his ear? You think Zidane just said to himself in his head "oh let me do this really stupid thing just for fun?"
Materazzi should have been red carded too. He totally deserved the headbutt! I hope it hurts well into tomorrow.
It's sad Zidane's final moment was like that.

the headbutt was hilarious. and Italy deserved that cup. i agree though that the win was anticlimatic.

ZIDANE IS A GENIUS.
Yes Its a shame he signed off his career with a headbut on an absolute idiot who provoked him but even then, there is no provocation to warrant that kind of reaction (what the hell could materazi have said? i need to learn that insult quick).
It wasnt the nipple tweak that did it...he walked away after the nipple tweak, then Materazzi said "something collosally insulting" which made him see a slight shade of Keane/Rooney red.
Lessons to be learnt:
1) Make sure Thierry Henry isnt in your team if you're playing in a cup final. Dude is jinxed
2) if you're the best player of your generation - wear earplugs when playing dirty Italians.
3) if you're retiring from international football and the tournament seems to be heading for a penalty shootout and hence your fate is no longer in your hands; then its best to go out with a literal BANG!!!
That was the best header of the tournament -if Materazzi was a ball he'd undoubtedly have ended up at the back of the net...auvoir le bleus...isnt it wonderful watching Henry in pain?
what pissed me off wasnt what happened, but Alan "i've won absolutely kack in my career" Shearer sitting on the boring BBC commentary team and saying: "Forget what Zidane's done in the past, he'll always be remembered for the headbut". That comment alone shows that shearer should never ever sit on a commentary team again. The idiot only ever managed to win a single expensively purchased and forever uncelebrated championship medal with Blackburn.
what the hell does the prat know about lifting - Spanish, French, Italian championships and fa cups? what does he know about winning the champions league 3 times with 2 different clubs? what does he know about scoring 20 yard screaming half volleys in champions league finals and scoring a total of 3 goals in actual world cup finals. what does he know about lifting the world cup? Absolutely nothing - i remember that about Zidane not a petulent conclusion to an absolutely sparkling career.
That incident was just a bit of dirt sprinkled on an absolute gem of a footballer...nothing that wont be forgotten in due time.

I found myself making excuses for why Zidane headbutted, but what he did is just as bad as Rooney stomping on some guy's privates in the game against Portugal. And I called Rooney a hooligan when he did that. Zidane deserved the redcard, period. That makes it even more painful to bear.

Given, I haven't seen the niptweak, the link's not working for me for some reason.

More importantly though, I found myself supporting France, not only because I thought the Italian team's filled with crooks, or becuase I particularly liked France as a country, but because I saw what an african team would be if we "organized". I have faith in Ghana, and I pray for Nigeria. That was a painful game to watch.

Nkem get over it.

I've been rooting for Italy since the beginning.
The rest of you were supporting France 'cos they were the only "black" team left in the world cup.

That Head Butt was the most interesting thing that happened in this World Cup .

Zidane's last act was to show the world how to get a red card with style. Not all this yeye diving and shoving.

That headbutt was beautiful. It was like BAM! i even laughing my head off.

@delot, i know i just wanted to smack alan shearer in the mouth!
He should not be allowed on the commentary team again!!!!!
He was just trash talking and feeling very important with himself.
Was it me or everytime they gave marcel desailly the mike he practically tore my ear off, i was like calm down man! And he was just talking to fast and loud! lol!

My dad said the other dude called him a 'mercenary'. Meaning that he wasn't really playing for the patriotism of France. Or some shizz like that.

Like you said...Zidane is a mere mortal. What a reputation to have for the rest of your life though....headbutter. Ugh.

Hey @ least this world cup was memorable for sumthin, am still a lil upset about France's lose, but hey life goes on!

In my opinion, Zidane did not do it well. He should have beaten the guy well!!! After all a headbutt and a couple of punches result in the same thing in the way of a red card i mean!