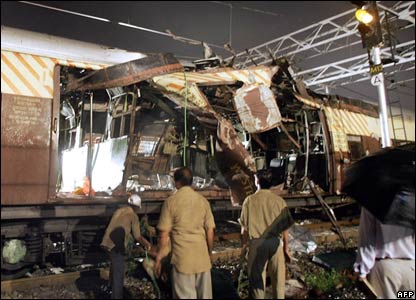 Conspiracy theories are the stuff of cranks, bored geeks, and the Daily Express (which prints Diana conspiracy theories till this day). But some things are too obvious to overlook. Yesterday, July 11, 2006, the Indian city of Mumbai had to deal with a simultaneous bombing of its municipal rail network.

The first thing I noticed was the date, which was similar to three previous Al-Qaeda related bombings. First, the New York and Washington attacks took place on September 11, 2001. When the trains in Madrid were attacked on March 11, 2004, it was noted that it had happened exactly two and a half years after the Twin Towers went down.

And then came London, July 7, 2005. After July 7, I wondered what Al-Qaeda's obsession was with dates ending in "en". There was 9/11, 3/11, 7/7, and now, in Mumbai, a perfect date of 11/7. Or to use non-US date writing style, 7/11, cornershop par excellence Stateside. What does this all mean? Absolutely nothing. There have been other bombings on drab and ordinary dates, so these aren't necessarily part of an overarching pattern. If they were, I'm sure the authorities would have sussed it by now, and Al-Qaeda would be looking for different bombing patterns. On the first of the month, every third Tuesday, or some such pattern.

However, I also noticed that the first time Al-Qaeda came to wider world attention was on August 7, 1998. I was back in Nigeria for a long and memorable summer holiday when the US embassies in Nairobi and Dar es Salaam were gutted by truck bombs. That was the first time I heard of Osama bin Laden and his not-so-merry band of followers. The Lewinsky scandalised Clinton reacted with cruise missile strikes on a possible dual use factory in Sudan, a factory the Sudanese said was a pharmaceutical plant. These strikes caused Mr bin Laden to up sticks from Sudan and move to Afghanistan, where he probably remains to this day. Or does he?

My theory is that Osama bin Laden is in Nigeria. He's in a Shari'ah state somewhere in the north of the country, probably in Jigawa or Yobe. Nigeria does have its Taliban, self-styled on the resurgent former regime in Afghanistan. People in a country like Nigeria (land of many names) choosing to call their children Osama, should also count for something. Bin Laden also cites Nigeria as one of those countries that are "most qualified for liberation". Any sensible person really should agree with bin Laden, with a caveat of course. We pray "deliver us from evil", but we don't presume that we'd be delivered into a different kind of evil. Mr bin Laden, if you want a chance for a rebuttal stating that you won't deliver us into evil, drop me an email. I'm sure we can work something out.

The feeling that Nigeria is on the brink of Islamist implosion is shared by some think tanks and journalists. Jeffrey Tayler, writing in April's Atlantic magazine, implies that Nigeria is potentially worse than Iraq... I know. I felt disdain after reading the article, and I won't respond to it until I've got the disdain out of my system.

Back to Mumbai. I've been to Mumbai before, and it is a poverty stricken city. It might be India's financial hub, but the world's largest democracy still has a long way to go. One of the sadder elements of these attacks on countries like India and the US embassies in East Africa, is that these are the very countries that do not have the resources to deal with terrorism. But they are the countries constantly being attacked. A country needs sophisticaed technology, human intelligence gathering, man hours to prevent such attacks. But when (rather than if) an attack takes place, one at least needs an emergency operation system to swing into action. Once people have been treated and bodies have been removed from the wreckage, you now need to catch the culprits. Nigh on impossible.

Even though the West is in a perpetual state of panic over terrorist attacks, most of them occur in the developing world. The Indonesian resort of Bali has been bombed twice in three years, in Egypt, Sharm el-Sheikh was bombed in 2005 (shortly after July 7 in London), Dahab was bombed this year, and Sinai was bombed in 2004 (October 7). These are just countries that have had to deal with multiple attacks, but there's still Istanbul, Lebanon, and Iraq. Compare this to the three attacks in the West (New York, Madrid, and London), and compare the responses of the emergency services to these tragedies.

In Mumbai, the scenes were of utter chaos, meanwhile in July last year, I distinctly remember a police squad car being filmed by BBC News 24. The car was arriving at one of the bomb scenes; it looked for a space to park, and then reverse parked into a space it found. Parallel parking? You'd be hard pressed to find any calmer, mundane, and organised behaviour under such circumstances anywhere in the world.

Islamist terrorism has its roots in the developing world, and anyone who's serious about tackling it needs to look to these regions. The bombers of July 7 may have been "homegrown", but Mohammed Siddique Khan and Shehzad Tanweer both went to Pakistan, possibly for training. The Hamburg cell of September 11, had its roots in the Middle East, the Madrid bombers had ties to the Casablanca bombers. How do we solve this problem? I have no idea. But we know where to look.
Posted by Nkem at 07:23

Al-Qaeda in Nigeria, even they aren’t that stupid - chaos does not give way to chaos – it wallows in it. They need to join the queue behind the warring Warri men and the Cross dressing governors. Their presence will be a small ripple in an ocean of discontent. What can anyone do to ruffle the average Nigerian now bar alien invasion? Even then, the war mongering Martians might be met with an impassive "na who una dey find?"
Let them come and liberate us…liberate us from the boredom and melancholy that is spontaneous pandemonium. They haven’t got a bloody clue.
“When” the world implodes, and social & economic systems as we know crumble and 90 meter high waves crash against the shores of; North America, the Indian subcontinent and Coastal Europe, erasing half the worlds population – those that have written books like “This House has fallen” will turn their epilogues upside down and re-label their short-sighted works “This house is bang in order”. We provide the most extensive case study for: “The survivors guide to surviving and revelling in the doomsday disaster”
Please note that if you listen to these over opinionated mongrels; we’ve been tittering on the brink for the past 40 years – now I ask: what exactly do they bloody recon is going to push us over? Al – bloody-Qaeda? Not a chance, not when we’ve survived Biafra, Babangida and Abacha. Our country was founded on the bloody brink mate. Our foundations are well and truly embedded in cliffs which will fall down only with the return of the dinosaurs. Bring em on – we’ll school Osama “and his not-so-merry band of followers” on how to really tear s£it up. Dullards, the whole lot of them – from the proposed terrorost liberators to the learned commentators – dullards.