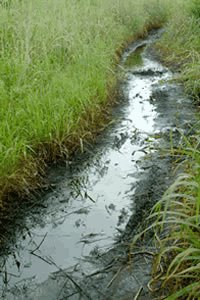 Today is the 10th anniversary of the execution of Ken Saro-Wiwa, the Nigerian playwright and human/environmental rights activist. Last night, the Royal Festival Hall hosted an event in his memory. On the bill were Nobel laureate Wole Soyinka, T.S. Eliot prize winner Alice Oswald, multi-instrumentalist Byron Wallen, and poet Lemn Sissay was the host. I've always thought, like most left leaning sackcloth wearing guardianistas that Ken Saro-Wiwa was a saint. A man executed by Abacha's kleptomaniacal military murderocracy at the behest of big business. He made us laugh with his popular Nigerian comedy Bassey an Co., he couldn't possibly be a bad man. But as I've grown older, I've learned that there is no such thing as black and white, only shades of grey.

Abacha should not have executed Saro-Wiwa, but more curious is the charge sheet against him. He was charged with treason and being complicit in the murder several Ogoni chiefs who were supposedly sympathetic to oil money. There are parallels with aspects of the British Terrorism Bill. Did he know that geeing up the Ogoni youth to stand up for themselves would lead to the murder of the chiefs? Under British law, his activities would have been seen as incitement, and he'd quite possibly have been prosecuted. The government recently won a vote in Parliament. The vote was on an amendment which added a clause that the prosecution would need to show that the defendant had "intent" to cause harm by making his/her incendiary statement. This is they grey area where Saro-Wiwa is concerned. I was pleased that Wole Soyinka mentioned that there might have been overenthusiastic members of MOSOP's youth wing, who took their cue from Ken Saro-Wiwa.

On the issue of treason, we were showed a video of the accusations Saro-Wiwa made against the Nigerian state and the oil companies. He accused the government of seeking to wipe out the Ogoni people, and oil companies being in connivance in this genocide. These are serious allegations, the kind that should not and must not be taken lightly by any government. Should he have been executed? Of course not. Were the charges trumped up? Perhaps. Were the charges grave? Absolutely.
Posted by Nkem at 15:29

R.I.P. Ken Saro-Wiwa.
My Wednesday nights were brightened up by episodes of Basi & Company.

Maybe one day I will finally understand what sozaboy was about.