The Guardian interview went well. Over time, I've learnt that one's feelings in the aftermath of an interview don't necessarily mean anything. I just forget about it and move on. When the results come, they come. I remember having an interview at the New Statesman last year, a place where I would've felt at home, only to be told I "wasn't print enough". My television experience had overshadowed my print journalism experience, even though I didn't even have up to one hour screen time at this point. This astonished me because at the time, I thought my strength was print, despite my television deviation. The interviewer has since left the NS, and is now a columnist at the Guardian. We might yet become colleagues. 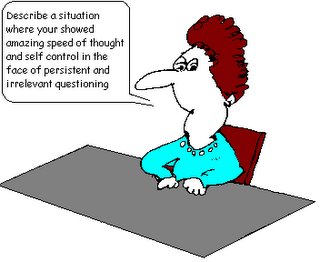 I also recollect going to an interview with one of the independent production companies for a traineeship sponsored by Channel 4. They were the second company that had interviewed me, after the first one, Maverick, turned me down. This indy had made a few controversial programmes about race and religion, so I knew I'd have a lot to talk about at the interview. In what has got to be an exercise in how best to make an interviewee uncomfortable, he said "I don't know why they sent you. I'm not sure what I'm supposed to do with you. One can't really tell on the strength of an interview alone how you'll do if you're employed here". Gee thanks. That's a paraphrase of what the guy said, but it shows the pointlessness of some interviews.