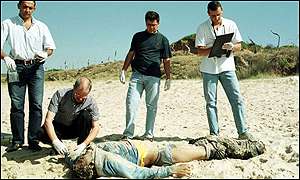 I saw this in the Sunday Times Magazine. It's something everyone should read, something every Nigerian must read. I got the image from the BBC website, but the one in the magazine was even more harrowing. There was a couple sitting on a beach. They had laid out their towel, had their drinks in a cooler, all underneath a tacky flowery parasol. Nothing strange there, it could be a seen from any beach in the world. In the background though, lying on the beach was the body of a dead washed up immigrant. The couple didn't seem to care, almost as if it's everyday a body washes up on their beach - which perhaps it is. But the lack of respect shown to the dead man, relaxing under what must have been a clear blue sky, oblivious of the dead man. Nothing should get in the way of our fun, dammit.

Morocco is heaven for tourists, but hell for the migrants trapped at its border. Unless they can escape into , they face brutal persecution. The novelist Ali Smith investigates

Take a few everyday words, words we think we know the meanings of. Like tomorrow, or doctor. Or trainers, ferry, fence, or mobile. How about football stadium, or network? Or water bottle, or pregnant, or ladder, or view? What about the word ? What does actually mean? How about a word like insight?

The English couple sitting next to me on the Casablanca plane have the word insight all over their hand luggage. Insight Vacations. It’s less than four hours from Heathrow to Casablanca, and for two hours I’ve been joking with the man about how he’s taking up all of our shared armrest. At the same time I’m looking at the book of images that Tom, the MSF photographer, has brought to show me.

It’s the work of a Dutch photographer who spent years taking pictures of the places around the world that people with no passport try to cross to get into other countries. The pictures of Morocco and Spain show people washed up on beaches, battered people huddled in blankets, bloated from being in water too long, people dead on the shore. There’s a barbed-wire fence that looks like a sci-fi vision of a totalitarian hell. What text there is says that in the year 2000, 15,000 immigrants were picked up on the Andalusian coast trying to get into Spain from Morocco. It says that, along with the three-metre-high barbed wire, the infrared cameras and the searchlights, the officials in the town of Ceuta, the Spanish enclave at the northern tip of Morocco, have put bars on all the sewer outlets. The identifiable bodies are returned home at their family’s cost, and there’s a cemetery in Algeciras full of stones marked with just the letter D for desconocido. Unknown.

Tom, Polly from the MSF press office and I are going to Morocco to visit the MSF team working with illegal sub-Saharan immigrants in the north. Because of a tightening of rules, it’s currently a small but vulnerable group. This vulnerability was pointed up in October 2005, when the Moroccan authorities rounded up 1,200 immigrants – many pregnant women and people with TB, people too ill to be summarily dropped back at the Algerian border as usual (it’s against Moroccan law to expel or deny treatment to a sick or pregnant person) – and dumped them in no man’s land below Bouarfa, in the desert, miles from anywhere, with no food, water or shelter.

Our plane food arrives. The man from Insight Vacations jogs my arm for more room.

In the MSF office in Rabat the notice board is covered with press cuttings from Spanish newspapers about the immigrant situation. In all the portraits the faces are blurred. Dr Javier Gabaldon, head of the MSF mission in Morocco, explains that it might be difficult to photograph people – those who have had attention drawn to them in the past by the international media have been jailed.

The first illegal sub-Saharan immigrant we meet has a very gentle face. He wants to be called Pascal in this article. He’s an unofficial liaison for MSF with the immigrant communities in Rabat; before he came to the city he’d been a translator, lay doctor and an MSF contact in the northern immigrant camps in the bush. A microbiologist, he left Cameroon in 2003 because of a “family problem, a social problem”, about which he looks panicked. “If I go back my life will be in danger.” He hitched and trekked without a passport to the international migrant junction Agades, in Niger. There was a lorry leaving that day for Libya. He spent two weeks in the lorry in the desert, one of 80 people. They had little food, just enough water. He tells me of the men in a car with no water for over a week, who survived by drinking their own urine. “The desert – the most beautiful place I have ever seen, and the most dangerous. We passed corpses.”

It wasn’t a dream of Europe for Pascal. “I had a job. I just wanted to go far from my country.” But religious intolerance in Libya drove him to try for “Europe in Africa”, as he calls the northern Spanish enclaves. So he trekked 130 kilometres in the dark, off-road, sleeping in the snow, to reach Gourougou, an immigrant camp outside Melilla. Five hundred people – Nigerian, Malian, Senegalese, 50 people from Cameroon – lived there in tents made from blankets and plastic supplied by MSF, all keen to “jump the fence” – only the start of dodging the police on the way to breaking into the Spanish refugee camp, where, if you get in unnoticed, you’ll be given expulsion papers that guarantee your passage to the Spanish mainland. If they catch you outside, they bar you.

“The first thing they say to you when you arrive is, can you make a ladder? Your passport is your ladder! You need two ladders. One for each side of the fence,” he laughs. “I made many ladders. I entered many times.” This slight man has done what in a week’s time, when I’ve seen the fences and patrols, I’ll know is close to superhuman: he’s broken in and been ejected six times, surviving finally in a quarry for 11 days, fed by registered Algerian refugees who shared their rations with him, before giving himself up out of desperation. After this, he trekked 437 kilometres to Ceuta, and tried to swim round the notorious fence there, only to be turned back twice.

“When you don’t have papers, you’re nothing,” he says. “Your first time in Africa?” he asks, adding: “This isn’t Africa! This is Europe!” He laughs loud and long, hilarious and sad. Pascal, a man with so much presence and so little permission to have it, says it clearly: “Morocco is a trap.”

Dr Gabaldon came here after stints in, among other places, Burundi and Rwanda at the time of the massacres. “Immigration,” he says, “is a long process with a long resolution. Every situation is different, every immigrant group is different, every individual profile is different.” What these all share is vulnerability to institutional and mafia bullying. The immigrants have access to two networks for help. One is MSF, the only provider of aid to illegal immigrants in the north of Morocco. The other is the sinister “Nigerian Network”, which has made a huge difference in the immigration situation over the past two years. Human trafficking is big money. It costs from £3,500 to £5,500 to get as far as Morocco.

“You pay the bill. High interest. Women will most often pay in sex work.” MSF often ends up looking after people abandoned by the network.

At the moment, though, most violence against immigrants comes from the Moroccan security forces. Last summer, all the inhabitants of camps in Bel Younech and Mariwari in the north mass-rushed the fence in an “organised” rebellion to try to enter Ceuta and Melilla. Few succeeded; 15 people died of injuries sustained after the security forces shot and beat them. It’s possible to see the “mistake”, as the security forces call it, of dumping the 1,200 people in the desert, as a bit of institutional vengeance in the wake of this.

Gabaldon is handling the aftermath of media excitement about it all; some news networks described a “genocide”, causing more local and government resentment. Gabaldon is angry too. “It isn’t genocide, and to call it what it isn’t endangers what we’re doing.” In two years, MSF has held 9,350 medical consultations in Morocco. A number of these were owing to violence against the immigrants. Of the most serious cases of violence, about 10% is carried out by the network, but 67% is from the actions of the Spanish and Moroccan security forces, with the Moroccan forces answerable for 52%.

Most immigrants in Morocco, about 2,000, are almost totally abandoned, with no way out and no way home. Morocco has stopped repatriating; the remaining groups are without embassies. Most live in the poor areas of the rich city of Rabat.

Hey, I tagged you lol. Make sure you play along.