My Nigerian tv debut had to be delayed because of a technical problem. I think the problem has the technical term, "NTA", but enough sniping. I'm not sure when we'll start properly, but hopefully from Monday, we'll be on everyday. We still haven't got internet at the flat, so I have to make the daily trip to the internet cafe to post these. Very frustrating. Thanks for the advice, I shall be giving my mum advance warning. 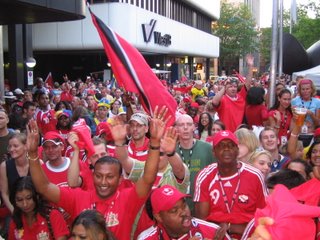 Trinidad and Tobago (above) might be the smallest country to ever qualify for the World Cup, but to compensate for being a small country, they brought the biggest party machine ever. After their 0-0 draw against Sweden, one could be forgiven for thinking that they had won the World Cup. The Caribbean rum company Angustora has organised a few free events centred around Trinidad games. And after the Sweden match, fans of all hues and colours converged on downtown Dortmund, and threw possibly the biggest party since Borussia Dortmund won the Champions League.

The Trini fans held a mini-carnival. Actually, they held a proper carnival. The stage had massive sound systems and booming speakers, along with customary toaster shouting “jump, jump, jump, jump, jump”. The women and girls where doing some escandaloso dances which surely cannot be legal before dusk. Blonde Swedes and a kilted contingent from Scotland joined the Trini fans in the partying, downing rum and gyrating to the alien but seductive rhythms of the Caribbean. So as not leave out any carnival detail, a costumed temptress performed a dance of such move-your-body-like-a-snake-ma-ishness, that jaws were being scraped of the floor. If I was Catholic, I'd be looking for the nearest confession booth (below).

Even though I was supposed to be working, interviewing fans and some of the stars they brought to perform – Dekstra and Maximus Dan – I couldn’t help but down tools and do a jig every chance I got. The mixture of people was astounding, a colour palette of jet blacks, royal whites, fuschia pinks, wooded maroons, verdy greens, all with the same finish, same accent. Dulux has nothing on Trinidad. It reminded me of my Trinidadian friend from school, who was always talking about his friend back home, whose name was "Rastaman Clint". Would you believe that Rastaman Clint was Chinese? Exactly.

We got back to Frankfurt at 2am, but didn't go to sleep until about 5am. I'm posting this at 9.30, all dressed up and ready to go to Cologne for the day. This job ain't easy, but someone's got to do it, right?:-)

the T&T fans better party real hard cos they're going home after the first round. their team played some crap 3rd division football but were lucky Sweden couldnt hit the back of the net. damn i wish i was in your shoes...poor me

The shots after the match of the Trini fans in the stands vs. the Swedes were priceless. You should see about covering the world cup of cricket next year.

oooh all that energy! May be hard ork but i'm sure its fun too. Enjoy

lol great post. was at a pub in stratford on the day and it was mayhem. good on them

Good on the Trini folks man..they gave a good account of themselves. Shaka for President.