The Black Stars acquitted themselves well, but they suffered from the perennial African disease of non-scoring-itis. Brazil, on the other hand were clinical, and 3-0 was a flattering score. Fat Ronaldo scored after being written off by the media, and he has now scored the most World Cup goals ever. Ghana missed Michael Essien desperately, because he would have been the one to check Brazil's marauding midfielders. He must have been bitterly disappointed.

I should be sad and depressed at Ghana's loss, but I'm not - for several reasons. When you follow Nigeria's progress at international competitions, you get used to heartbreak. And over time you build up resistance to crushing defeats and upsets. Ghana's loss was nothing compared to being hammered 4-1 by Denmark in 1998, or losing to Cameroun on penalties in the 2000 African Cup of Nations. In Nigeria, we live in hope. All. The. Time.

I was able to conduct four interviews with Marcel Desailly (born in Ghana), Leonardo (World Cup winner in 1994), Frank Lebeouf (former Chelsea and France defender), and Patrick Barclay, who writes fot the Sunday Telegraph. Missed out on Mick McCarthy and Graham Taylor due to stretched resources. One camera can't be in two places at one. But we live and learn. So on a personal front, a good outing. 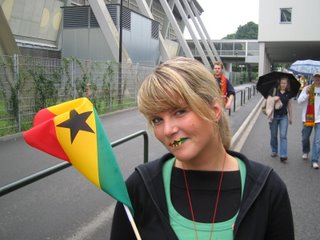 The German public were fiercely partisan in favour of Ghana (see picture above). Brazil even got booed, and constant shouts of "Ghana" echoed through the stadium. Ghana might have been underdogs going into the game, but it didn't feel that way. Ghana is now firmly on the football map, but I'm sure their World Cup perfomance will lead to even greater tourist awareness. Ghana Tourism should expect an influx.

And finally, after leaving the stadium, we bumped into some Brazilian fans sashaying to some samba rhythms from Rio (below). How could I stay upset? I said to myself, "Thank goodness women are not one of my vices". Then I thought, "actually, that could easily be fixed".

non-scoringitis? he he. you shouldn't be depressed. i know Ghanaians aren't. They've worked themselves into a frenzy of righteous indignation about how they were robbed of a chance by the bastard of a referee. who am i fooling? they're right! It's been all over the radio about how two of those goals were offside and the referee just looking like lucozade, and the same man gave the black stars' coach a red card for telling him that he should just wear a yellow (brazilian) jersey while he's at it. How can you give a coach a red card?? he he Ghanaians are quite content insulting Fifa, Brazil, the referees...In the papers yesterday, there was a tabloid-ish piece claiming that the referee was begging Ronaldhino for his jersey. sigh, I love this people.

Anyway, WE are quite happy WE even qualified :-) They're talking about giving the players some kind of national honour, and that they deserve royal treatment when they get back.