Scandal on Leopoldstrasse and other tales

So there I am in the middle of Leopoldstrasse in Munich, doing a "piece-to-camera", when two girls plant simultaneous kisses on my cheeks, and then disappear as quickly as they appeared. I giggle like a little girl whose teacher has just asked her to sit beside a boy she fancies. I'm busy trying to make an honest living, but meanwhile, there are German frauleins involving me in a lip smacking plot. How is a man to survive, I ask? Whenever there's a match, Leopoldstrasse (a major thoroughfare) becomes a street carnival of song, dance, beer, and of course, kisses. There's no better place to be than in the city that has just witnessed their Mannschaft qualify for the quarterfinals of the World Cup.

The Allianz Arena, otherwise known as the Schlauchboot (German for "inflatable boat"), is truly breath-taking. It looks like some kind of space wheel which has fallen off The Michelin Man. It was daylight when Germany beat Sweden so I didn't see it in its nighttime glory, which sees it change colours (see picture). I sat on the very first row, which doesn't have a very good view of the pitch because of the sideways, rather than overhead view. But if you ever want to grab Miroslav Klose's bottom, or tell Freddie Ljunberg face-to-face that he's a prissy pretty boy, it's as close to the action as a spectator can get. In fact, the ball once came to where I was sitting, and I artfully punched it towards the ball boy. I could spy Klinsmann from the corner of my eye - the poor fella had an envious "if only he were a Deutschlander" look.

Today, we take it easy. England play, but we have no guaranteed tickets for the match. There is more media following England than following the host nation. As Nigeria aren't in the competition, so NTA is way down the pecking order. If England loose, the fans will get drunk and smash up Stuttgart, and if they win, they'll probably get drunk and smash up Stuttgart. I shall look for a church, seek peace from the madness of multi-city travelling, and give thanks for tiny mercies. Then Italy and Brazil training sessions beckon. Azzuri, or the Boys from Brazil? Only one is possible, as they are both held several kilometres apart at pretty much the same time. Might do Brazil. Might do Italy. Dunno. Choices, choices...

On the day Ghana beat USA, we went to a Ghanaian joint in Frankfurt called "Heart of Africa - Kenkey House". I had eaten plantain there last week, and needed another fix, so I ordered fish and plantain - I drooled throughout the meal. Eating it brought back the most improbably memories. It reminded me of school dinners. And in the split second that I recognised the taste, I realised how privileged I was at school. Most people think of school dinners with puke inducing disgust, but I was eating at a home-from-home bar/restaurant, and I thought of Mr Prosper's cooking. It now seems obvious that our diet was predominantly Ghanaian. The kenkey, the rice and beans, the way the plantain was fried, the fufu, the okra - all Ghana.

Witnessing the Ghanaian community here has made me respect immigrants even more than I already did. The Ghanaians here are among the most prominent of the black communities in Germany, with two members of the German World Cup squad (Gerald Asamoah and David Odonkor) of Ghanaian origin. It is a sign of bravery that they would chose to emigrate to an alien German language and culture, rather than an Anglophone one readily available in Britain. The quest to make a better life for oneself has no limits, and I applaud those who put in the hard work. More power to your elbow. 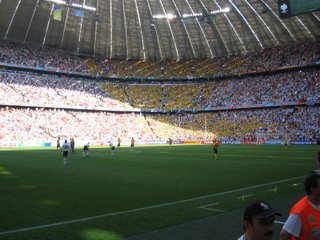 Swathes of yellow-clad Swedish fans in the corner.

The stadium after the final whistle, look at all the flags. Oliver Bierhoff walking past. 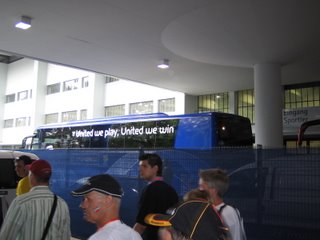 All team coaches have mottos on them. Team USA coach, United they lose. But United nonetheless. 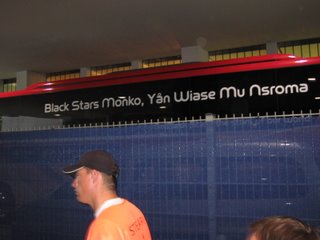 Ghana coach, with motto in Twi. Translation would be appreciated.
Posted by Nkem at 02:05

Kissed by frauleins - don't go humming "Like a virgin, touched for the very first time" :-)

You are doing well, like the scenes of the aftermath.

I can bear to watch England v Ecuador - too much tension but I hope it would turn out right - would you be covering that too?

Just made the england game situation slightly clearer. We'll be covering the chaos from Frankfurt:)