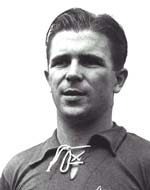 I've quite often described good music as "music to cry to". The tributes to Ferenc Puskas recounted in today's Daily Telegraph sports pages make me feel that way - very touching accounts. Puskas was before my time, playing from the late forties to early sixties. But thanks to channels like Eurosport, I've been able to see some of the older players work their magic. And Puskas was one of those magicians.

News organisations are sanguine to the point of nonchalance, if someone is going to die, we'll be ready to set certain wheels in motion. On the off-chance that Puskas died, I had a list of people who could contribute to our show to get in touch with. I had plans of my own, though. I'd call up Brian Glanville. And he did die on the morning of November 17, during one of my night shifts.
At about 7.45am, I called Brian Glanville - no answer. I kept trying until after 8, a last throw of the dice since we would be off-air at 8.30am. He picked up, berated me when I admitted that it had been me pestering him at such an early time. I said, "it's about Ferenc Puskas". "He's dead, is he?" I felt like a doctor in a hospital breaking bad news to soon to be distraught relatives, "Yes Mr Glanville, he's dead." A slight pause, "okay, I'll do it."
Glanville seemed like the right choice, a football journo of the old school, who knew Puskas and his game. "It'll only be about three minutes." "Oh I can go on forever about Puskas", he said, his sleepy voice slowly coming alive. And he did try to go on forever. I think we had to drop our last story and let Glanville regale us and the world with his Puskas anecdotes, of which there were many.
I'd like to think it was my charm that persuaded Glanville to talk to us, but I think not. It was "Öcsi". Like I said, the tribute is moving. Read it.
Posted by Nkem at 13:39