Babaginda is a twit. 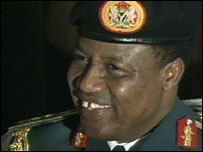 The misspelling of Ibrahim Badamosi Babangida's name is intentional. In the 1980s and '90s when I used to go to Cameroon on holiday, a friend of mine, used to call him "Babaginda". We were about seven-years-old at the time, so he could be forgiven for his oversight. It always makes me laugh when I remember it, because at the time, I thought it was just how Francophone people pronounced Nigerian names.

IBB is serious. After last month's report in the FT about him wanting to run for president in next year's general elections, he has now revealed his plans to the rest of Africa. He appeared on the BBC World Service programme, Network Africa, this morning; listen to the interview. I'm seething with rage. The irascible Jeremy Paxman once said that when he interviews politicians, he thinks, "why is this lying bastard lying to me?" That's how I think of Babangida. Why is this fat, lying, coup plotting, thieving general lying to me?

In 2000, the late Pierre Salinger, White House press secretary during JFK's administration, said that if Bush won, he'd leave the US. He made good on his promise, and moved to France, where he died in 2004. If IBB wins, consider me a Nigerian exile. I will not set foot on Nigerian soil so long as IBB is president.

If Nigeria votes IBB in, they deserve him and everything he does to them. After all, people get the governments they deserve. By far the worst IBB-related sentiment I've heard is the "na him spoil am, so make e come fix am" claptrap. Apparently, when a builder through shoddy workmanship, brings down your house, you should invite him once again to rebuild it. You're right, it doesn't make sense.

This is the part where I'm supposed to implore all right thinking Nigerians "not to vote for him, because I really love my country, and I really like visiting, and please don't make me stay away." Bollocks. Not voting for IBB should go without saying. Like nobody should have to tell an adult not to put their hand in fire, or not to smear dog poo on their face. It's common sense. No person with a brain would do these things, so why vote for IBB?

The same goes for Buhari, and all the other power hungry maximum military leaders. Stay in the bloody barracks.

The Dog of Freetown said...

hear hear. i still don't understand how it isn't illegal for a former head-of-state to run for president again.

Nkem, I feel your anger. Reckon we could collaborate and do a Rawlings on them all? I am normally peace loving but as we say - enough is enough.

let's just hope he doesn't become president. he maybe "voted" in...but think about the process *coughs* bribes, etc., that might go into the process.

if he wins...nigeria wouldn't deserve him. no way.

Nkem why are you talking like the votes fellow nigerians have made were ever actually counted? If he wins it'll totally not up to us. No one in his sane mind would vote and ther are many money hungry insane minds.

I feel your angish.Although am not really into politics, but you do have a point there.Both as you and i know, in Nigeria, money talks and bullshit works.As much as people would not like to vote him in as the next Nigerian President, they are left with little or no option especially when money is involved.I think its gonna take time before Fellow Nigerians start voting on the basis of what is good for the country not what they can benefit from the candidate.
Sorry for the digression,pls do visit my blog at www.ambitiousdiva.blogspot.com

No one should vote for him? He should not be allowed to run in the first place. On first sighting, he should be clamped and thrown in jail to rot there. Babangida running for presidency in Nigeria is a crime against Nigerians, crime against those whose blood was shed for our democracy, and a crime against humanity period. Issue an arrest warrant for Babangida--"Arrest on sight!!!"

Geez, everyone I know is ticked the fuck off.

Oh and by the way, check out my blogsite:
odaicheville.blogspot.com

Dude, this is probably the most opinionated i've ever heard you come across... you're allowed this just the once journo.
I feel you on this one though, i think if we vote him in, we deserve him. No excuses. he will win, and so we do deserve him - God help us... i recon we're past redemption in that country.

"If Nigeria votes IBB in, they deserve him and everything he does to them."
I'm assuming you're using the word "vote" in very loose terms, as this implies they have a choice to make. Unfortunately we all know what elections in Naija entail - a lot of rigging. We can only hope and pray that this one wil be an exception.

I really feel you on this one. The most annoying things is that he is the favorite to win. If he comes into power, i don't think Nigerians deserve it. He will get in power due to behind-the-scene-run not because Nigerian voted him.

let all of us get one thing straight.
People in Naija sell their votes and they sell it cheaply.
If they hear one chief is giving out 500 Naira if you vote for him, you don't even need to go to them, they will flock in droves to where the 'oga's' henchmen is.

And thus we deserve every lil bit of crap we get.

When it comes to other issues, religion, sexuality blah, blah. We will be up in arms quicker than the speed of sound.
But when it comes time for us to step up, we start hmmming and hawwing...

You know I love my country, but I complete abhor our ignorance, greed, stupidity and absolute 'tits about ass' way of doing things.

If IBB gets in, it would be because 'us' the people allowed that bullshit.

thank you ojare. there are plenty of ppl who will vote (and campaign and praise-sing) for IBB because of money. which is why he should not even be allowed to run in the first place.

What remains is for Chris Uba to run...LMAO!!! let me keep my behind anon for this post

I'm totally with you on this...and with Soul on the riposte to the "But wetin we fit do" handwringing response

As if you read my mind, Babangida and his cronies put us in the position we are in Nigeria today, yet some set of useless people are now clamouring to have him back to continue his atrocities, I just don't understand