"Religious" strife in Jigawa state after someone apparently insulted the Prophet Mohammad. Religious violence exists in Nigeria, but one can't understate the ability of jobless louts to seize the insulting of a religious figure to loot, slash, and burn. Or even using the situation for political ends, with elections coming up and all that. 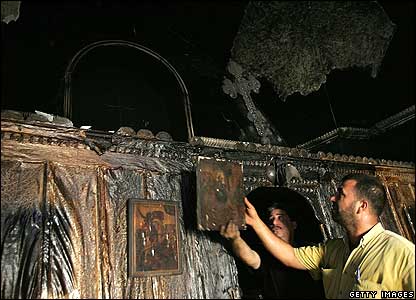 Anybody with access to a radio, television, newspapers, or internet, would know the consequences of bandying the Prophet Mohammad's name willy-nilly. And the rioters would know that burning churches is so last week in the West Bank (pictured), rather passé . What Jigawa needs is not arrests, but internet. It would solve all the ignorance problems.
Posted by Nkem at 02:32

How sad and annoying! Looting and burning down houses all in the name of God.

What the heck....they need a hug or something. I'm sick and tired of always reading about some Muslims (in Nigeria and around the world) always resulting to violence over minute things - it gives a bad name to the better half of the Muslim world. I had Muslim neighbors growing up and they were nothing short of fascinating, therefore, I can’t bring myself to condemn all Muslims for the doings of a small, illiterate group of good for nothing virgin seeking hoodlums.
As for those ones in Nigeria, where were all of them during the military rule? Isn’t it funny how they didn’t have the guts to come out and burn people’s properties up and down in the name of allah considering the “ruler” was Muslim himself? Where are the sons of the imam or whoever it is that sends them to go and cause havoc? Are they demonstrating too? Are they also willing to give their life for Allah? Isn’t it amazing how they choose to keep them illiterate? If they were learned, who would go burn the church or mama chidi's shop? Half of this people don’t even know what they are shouting about, someone gives them placards to go and shout “death to infidels” with a couple hundred bucks and they go, no question asked. There is no true God, that condones killing of innocent people for his sake.

Islam isn’t a violent region, but insult my God and we will kill you. There are a number of people doing a disservice to Islam. Or are they actually following the writings in the Koran?