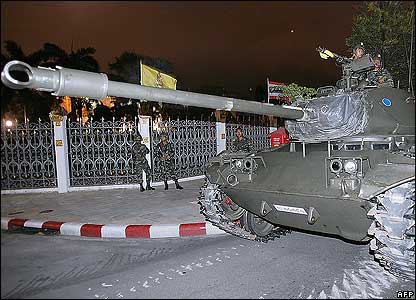 The Thai coup d'etat is pure text book. For anyone who doesn't know how to organise and execute a successful and bloodless coup, here are the steps:

The people will eventually get disillusioned with you. Then another military faction will take over. Repeat cycle until oil, terrorists, or communists are found in your country, at which point the US will invade.

Loved it and your other blogs. I cannot profess to like politics but still it was an entertainig read.

Nice one! Quite funny. I personally don't support coups and am sucker for democracy and all shindigs.

Lol...i wonder how the deposed president is being addressed at the UN summit: Mr "chair-pulled from under him" President.

The Dog of Freetown said...

I am right this minute organising a classic Maoist insurgency in the Thai countryside where I hope to appeal to the President's loyal supporters. Naturally I fully expect the expansion of the urban centres and the irrelevance of the rural population to the orchestration of state power to render my movement incapable of victory. I'm aiming for the classic Nepalese stalemate. I can't wait.

Isn't this just classic...lol. I'm waiting to see whether they'll stay true to their word and put in a civilian head of state in two weeks...now i can't agree that it would be a democratically appointed civilian because No type of election can take place in the space of two weeks. But then again...

But then the overthrown leader was indeed attending that most pretigious of khaki parades, the OAU when he was ousted on the 25th of July 1975 - I remember that day and the leader was Yakubu Gowon.