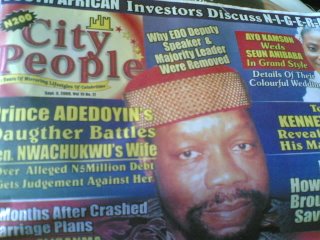 I have a confession to make. I read City People. Regularly. There, I've said it. City People is a celebrity rag par excellence. Actually, forget the celebrity bit. City People, along with magazines such as Ovation, has helped to redefine the term "celebrity". Celebrities in Nigeria are no longer the people who are celebrated for their talent, good works, and blah da hoot. Celebrities have now become anyone who celebrates. If you attend a party to celebrate a couple's wedding, you are a celebrity.

Another wonderful term used in City People is "Big Boy", eg Lagos Big Boy or Abuja Big Boy. Yours truly would be a London Big Boy. This London Big Boy lives in New Cross, with close proximity to local amenities. He can be sometimes seen buying the best cuts of BOGOF chicken at the New Cross Sainsbury's. He also has access to some of the best in modern transport. He's often a guest of London Mayor, Ken Livingstone's TFL. There are even rumours that he once said, "My other car is a bus." No other London Big Boy can claim to own a whole bendy bus, much less the two (453 and 436) he has been spotted on. There are rumours that he's going out with a woman, but our sources would not divulge more.

Every so often, they put up advertisements looking for English graduates to work on the paper. If they indeed have any English graduates working on their staff, they should sack whoever is in charge of recruitment. That said, they've improved a bit recently.

I read City People because the magazine (or is it a newspaper) tells me both what I need to know, and what I don't need to know. Its politics coverage is very good, with politicians from the length and breadth of Nigeria touting themselves as the chosen one in its pages. As for what I don't need to know, and what is also often irresponsible journalism, I don't need people's personal details. In the past few weeks, I've seen people's vehicle licence plate numbers, and email addresses. Putting such information into the public domain compromises people's security - even if they claim to be Tuface Idibia's baby-mama.

The edition of August 23 had an interview with singer and actor, Onyeka Owenu. Her interview was fairly impressive. She is going to be running for the chairmanship of the Ideato North LGA in Imo State. City People sutpidly asked her if the position wasn't too low for her. "I think it's a very special position, because you're directly in contact with the people, and you can see were the shoe pinches, and you can begin to concentrate or lay emphasis on those things that are most important to them."

That, to me, is a someone who is passionate about her community. She doesn't want to be in the Senate, but close to where the action is. No pushing of pen and paper in the corridors of Aso Rock, but localism and humility about what can actually be achieved.

Take Gani Fawehinmi at the last elections. Gani is a people's champion, a political gadfly, gnawing away at the powers that be. But would he ever be president? No. He ran for a position he had no chance of winning. A smarter move would have been to run for the Senate, or governorship, but not president. He would have had a better chance of winning, and been in political office, helping to make changes. Alas, he lost his bid to be president, and would have been in the political wilderness for four years by next year's elections.

Anyhoo, I'm off to read this week's City People. Apparently, Ojukwu has some disease.
Posted by Nkem at 10:22

I've always loved Onyeka- she's smart and talented and politically aware. This is the second time she's running for the Chairmanship of her local government and I hope she wins. A friend has a theory that it's at local government level that the change in Naija has to begin- so maybe Pat Utomi should be running for LG chair and not president, and then build credibility there??

Are any of these rags online?

Akin, unfortunately, these rags aren't online. But the shops of SE London are awash with them.

uknaija, running for LG chair would be a smart move for Pat Utomi, he's not going to Nigeria's next president...

Good point there about Gani. Instead of supporting Adams oshiomhole who is contesting for the governorship position in edo state, he declined an invitation by Oshiomhole to attend his declaration ceremony because according to him, Oshimohole as the people's man has let the masses down, he reasoned that he should be gunning for the presidency and not the governorship of a single state out of 36 states that he can rule.

I love City People also!!!
What you said makes sense. Gani and even Pat Utomi running for 'smaller posts' other than preseidency would have seen them winning. But we never learn!!!