The irony of it all 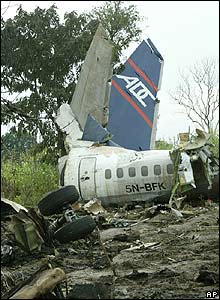 When I first heard the news about the plane crash, I had just been listening to World Service edition of From Our Own Correspondent, one of the best examples of radio anywhere in the world. The eponymous correspondent was Kieran Cooke, ironically, had been talking about a mishap when he was on a plane in Nigeria. He found the Nigerians' response to such a potential tragedy humourous and endearing. He must listen to the news of the ADC crash now and not see the funny side of his mishap anymore.

The FOOC piece was on the African news page of the BBC yesterday, but has since been taken off. One wonders if it had anything to do with treating the crash with sensitivity. Someone asked me why prominent Nigerians people always seem to be in plane crashes. Well, rich Nigerians have no option but to travel by air. If a plane is departing from or flying into Abuja, it will inevitably have Senators or Congressmen on the flight.

My mama sent me text message from Lagos last night saying, "No rail, no road, people travel by air - it's a problem." That is the crux of the Nigerian transport system. It isn't so much to transport living bodies from one place to another, but almost a conduit of souls to the afterlife. The grim reaper stands at the transit points, airports, and bus depots. So this is how you wish to die. Mid-flight, armed robbery on the highway, car crash after hitting a crater on something people still amazingly call roads instead of dirt tracks? The man in the hooded cape holding a scythe would have offered the choice of despatching you on a railway track, except Nigeria barely has any.

Of course the issue of accountability arises again. Last year, it was deemed that Babalola Borishade should stay and fix the mess of the Sosoliso and Bellview crashes. Granted. But his staying gives no indication of where the buck stops. He has been silly enough to blame the pilot for the crash. The pilot apparently ignored control tower advice not to take off until weather conditions were better. This begs two questions. Why is the opinion/advice of the control tower not enforceable? And why is the safety of the passengers and the plane not put before profits? I can see no other reason why the pilot would be rushing to Sokoto, other than to minimise ground time, and make some more money on the return flight.

If we can still suffer another fatal crash one year after Bellview and Sosoliso, there is much that Borishade is doing wrong. As the headmaster of a failing school or the captain of a faltering ship would do, he should go. Walk the plank, jump or be pushed.
Posted by Nkem at 13:00

Nkem, even if Borishade goes, who's to say that his successor will be any better at enforcing measures to prevent this tragedy from happening again? I despair for naija, I really do.

This begs two questions. Why is the opinion/advice of the control tower not enforceable? And why is the safety of the passengers and the plane not put before profits? I can see no other reason why the pilot would be rushing to Sokoto, other than to minimise ground time, and make some more money on the return flight.

I'm not sure about Nigeria aviation regulations, but the control tower is in charge of issuing departure clearances and is absolute. If a pilot disobeys ATC, that pilot will probably not be flying any longer. Besides this, there are regulations in place which prevent flight in certain specific weather conditions. With Visual Flight Rules, for example, the visibility has to be at least 3 statute miles before a pilot can fly. This is not so with IFR, or Instrument Flight Rules. However, the en-route ATC (called ARTCCs, or Air Route Trafic Control Centers) are in charge of controlling flights after they leave the area around the control tower and can also detain a flight if the weather doesn't permit.

The rush to fly is not a uniquely Nigerian problem: there have been cases of flights taking off with bad equipment or under terrible conditions only to crash because a plane on the ground is losing money, big time. The big problem is to find out exactly why this particular crash occured before any decisions are made one way or another.

Unfortunately, I don't think that's going to happen. I do know that simply firing some figurehead is not going to make Nigerian aviation any safer.

My colleague has a hard time believing that all those people had a valid reason for flying to Sokoto. You should hear the conspiracy theories.

All I know is, I'm not flying in Nigeria. If for some reason I have to go to Abuja, or god forbid Kano, I'm taking a bus. Did it in Ghana, will do it again. Something has to be done about our roads, and the rampant violent crime taking place on them. It's all very depressing.

you'll need to copy and paste

Your image of the grim reaper at every junction is a little extreme!! I admit there are issues but there is a case for putting this in perspective.

cultural, you would have to be living and travelling within Nigeria to understand what Nkem means.

That's 4 plane crashes within a year and a half. Many of us have parents or friends who travel to Abuja or Lagos on a regular basis. One of my few friends from secondary school lost her father in one of the plane crashes last year. Then let's talk about road accidents, boat accidents (quite a number of people die every year bcuz a boat capsized), explosions at oil rigs, there are so many ways to die in Nigeria. Armed robbery - two of our cars were snatched on different occasions growing up, one at gunpoint on the expressway. It is common here for a 35 year old to just "slump" and die, no one knows what caused his/her death. Drive down to church on Sunday morning and you see a burnt corpse (former thief) by the side of the road. Then just last week we hear the news that the major bridge between the commercial district of Lagos and other residential areas can collapse anyday. I commute to work everyday, and everyday I am cognizant of the fact that accidents happen. You need to know what it's like living in naija first.

Everchange, I have travelled in Nigeria although I have not lived there on a daily basis so I do understand what he is referring to.

One can always see the devil everywhere if one looks but I don't think it is something that is helpful to add to the mix.

This is a firstly a control and policy issue in my opinion and secondly an issue of the population not rising up and demanding reform.

I know this is also a very emotional issue and that, in Nigeria, tends to naturally evolve into religious allegories but I think that is one of the main reasons things aren't changing. Please see it as an Act of God. God will always have an influence on our world but that doesn't mean we should all stand still and play no part. I believe that if we go the wrong way he'll drag us back so we may as well make our preferences known.

Please do not get me wrong on this subject. I am very concerned about what is happening in Nigeria. I have someone I love very dearly out there and I plan to travel there myself shortly so it does affect my daily life as I naturally worry that I may never see him again as he travels around on business but if I sat here seeing the grim reaper at every junction I'd not sleep and I cry every night for the potential that I may lose a person I love and I can do nothing about it. You have the opportunity, since you are living in Nigeria, to have influence so I beg you to stand up and make that difference that I cannot. All I can do is sit here and encourage you, in the only way I can with my words, to do that on my behalf but god dammit if I lived there I would be screaming blue murder for reform but no doubt they'd laugh at me as I'm white!!!

"please see this as an act of God"
You know, it's statements like these that make me want to hit somebody. I only know a little about God (and i suspect you know only a little about God too)...what I do know is God is out there doing his thing.

I do agree that nigerians need to step up and do something about it. And I am hoping we do just that. But right now we're grieving/ranting, which is the first step.

You've travelled in Nigeria a few times, but you don't live there on a daily basis, and you did not grow up with all the things I mentioned. So you cannot understand how people can be so fatalist (whether giving everything to God because "anyday can be your last" or resigning themselves to the thought that things will never change). It's not about you, cultural. You need to just accept that.

Everchange, all I was trying to say in my initial point, however incorrectly written or described, was that in my opinion Nkem's comment that the grim reaper is at every corner is just as unhelpful as saying it was an act of God as many will give up fighting for something better if they think death is inevitable if I travel in Nigeria so I may as well stop asking for something better. That was my take on that comment. I admit my frustrations have probably all been communicated in a topsy turvey fashion but thats just me.

I never said this debate was about me. However, this does impact my life in some way and so I believe I have the right to be upset and angry just like you. Yes, I may not live there right now but I am likely to at some point soon and so I will be damned if anyone will tell me what I should and should not care about.

Maybe I wrote my statement incorrectly and yes I do not claim to everything about God, noone can. However, I do believe I have an appreciation of what you're talking about and yes I do understand that people are grieving and that is a perfectly normal and valid response but I am still very aware that nothing is still likely to change after this incident as noone is kicking up a fuss.

So, I ask myself just like you how many incidents like this do we have to have until someone, anyone decides to raise their voice and demand change. I may be labelled a stroppy woman by those who know me but I do care about raising my voice when I think something is wrong. Maybe I write a letter myself to the Nigerian Commission and risk my reputation, I don't care if it stops one of these accidents happening again. I have the responsibility to act just like eveyrone else.

Whilst everyone says its an act of God of course things will not change. Despite my profession of faith I do not accept such explanations for all the things in life.

Sorry if this seems like a rant its just got under my skin.