It's only a mouse 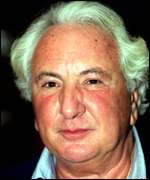 I've just moved into a new place, and in the process of doing some spring cleaning, I'm finding articles from days of yore. Remember that esure.com advert with Michael Winner (pictured)?

Just when we thought the TV licence van had left our street, and it was once again safe to turn on our television sets, Michael Winner makes us all have three Death Wishes with his esure.com adverts. Some smart advertising exec thought that the best way to make post Little Britain Britain buy that most dastardly of products, insurance, was to put a man dressed as a woman beside the insufferable Michael Winner.

A wonderful idea, except, the esure.com advert isn’t at all funny. This follow up to the, “calm down love, it’s only a commercial” adverts fails because it combines the worst elements of Hollywood (the curse of the sequel), and insurance adverts (the quest for humour).

Insurance is one of the greatest cons of capitalism, and attempting to make us laugh is admirable, but daring to suggest we’ll be gullible enough to latch onto another catchphrase, “calm down love, it’s only a mouse”, is just taking the Michael Winner.

Of course, the main premises of the advert are that women are scared of mice, they know nothing of technology, and sadly only silver haired fox Michael Winner can save the fairer sex. All men will worship Michael Winner for this because it means the road to enlightenment can be found in a bottle of peroxide bleach, and underneath a 7 minute sunbed. Alas, for women, the solutions are the same: rely on Michael Winner to fix animate or inanimate rodent problems.

No doubt some pop culture addled teenagers will latch onto the catchphrase and torment innocent bus passengers with the verbal equivalent of a rusty syringe. Elderly passengers will skirt the fine line between “reasonable chastisement” and maniacal homicide, while more modern adults will ring the ASBO police to act
accordingly. So the next time your granny wakes up in the middle of the night,
be sure to comfort her with the words, “calm down gran, it’s only a nightmare”.

yet another notable example of DRY british humour!